/** * The header for our theme. * * Displays all of the section and everything up till
* * @package protopress */ ?> How to Create Polyrhythmic MIDI Echoes – Craig Anderton  |  Create · Innovate · Inspire
Skip to content 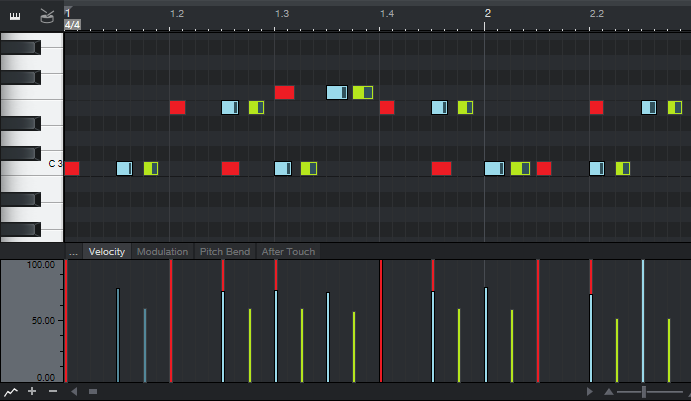 There’s more to life than audio echo – like MIDI echo

Although the concept of MIDI echo has been around for years, early virtual instruments often didn’t have enough voices to play back new echoes without stealing voices from previous echoes. With today’s powerful computers and instruments, this is less of a problem – so let’s re-visit MIDI echo.

It’s simple to create MIDI echo: Copy your MIDI track, and then drag the notes for the desired amount of delay compared to the original track. Repeat for as many echoes as you want, then bounce all the parts together (or not, if you think you’ll want to edit the parts further). In the screen shot above, the notes colored red are the original MIDI part, the blue notes are delayed by an eighth note, and the green notes are delayed by a dotted-eighth note. The associated note velocities have also been colored to show the velocity changes for the different echoes.

But wait—there’s more! You can not only create polyrhythmic echoes, but also change velocities on the different notes. Although the later echoes can have different dynamics, there’s no law that says all the changes must be uniform. Nor do you have to follow the standard “rules” of echo—consider dragging very low-velocity notes ahead of the beat to give pre-echo.

Some DAWs that support MIDI plug-ins offer MIDI echo, which sure is convenient. Even if your doesn’t, though, you can always create them manually, as described above. The bottom line is that there are many, many possibilities with MIDI echo…check them out.

Why MIDI Effects Are Totally Cool