/** * The header for our theme. * * Displays all of the section and everything up till
* * @package protopress */ ?> Why It’s a Good Idea to Convert MIDI-Driven Instrument Tracks to Audio – Craig Anderton  |  Create · Innovate · Inspire
Skip to content 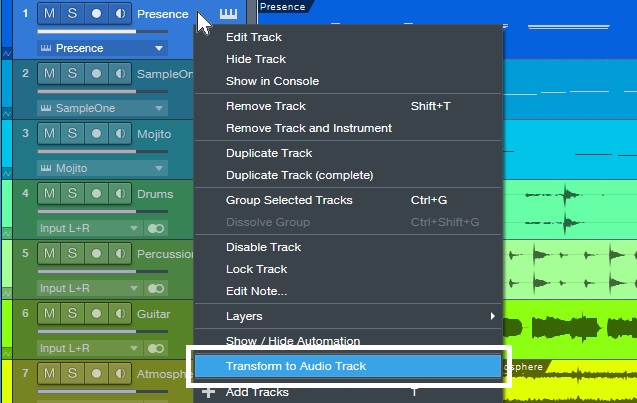 I don’t really feel secure about MIDI-driven instrument tracks until they’re rendered (although that doesn’t mean I’ll delete the MIDI track). Most DAWs make it a simple process – the screen shot shows the instrument track Presence (in Studio One) being transformed into audio.

Programs handle this function in different ways; for example, a program might “freeze” the track by converting a MIDI-based instrument part into audio, and then disconnect the instrument from the CPU so that it doesn’t draw any power. This frozen track will often be saved as audio, and you can always “unfreeze” it if you need to do additional edits. Studio One allows saving the original state so you can revert to it, or you can choose to make the rendering permanent.

Let’s cover the advantages to rendering.

The odds are pretty good whatever program you use in the future will be able to read audio files—but maybe not an instrument plug-in, which can fall victim to operating system changes, not being updated, or the company going out of business.

BAKE IN THE EFFECTS

You probably have your instrument going through some effects…right? When you render them along with the instrument, you’ve eliminated even more variables.

Some synths produce random modulations. So, render the file and preserve those random changes. If you don’t like them, undo, and then try rendering again until they’re what you want.

An audio track is simple. A virtual instrument will have either a MIDI track feeding it and an associated audio track, or a track that’s MIDI with an audio output, or maybe multiple outputs and you’re not using all of them. Maybe converting instrument tracks to audio is just nostalgia for some aspects of tape’s workflow, but audio tracks are simple and obvious.