/** * The header for our theme. * * Displays all of the section and everything up till
* * @package protopress */ ?> Why An Adjustable Nut Matters – Craig Anderton  |  Create · Innovate · Inspire
Skip to content 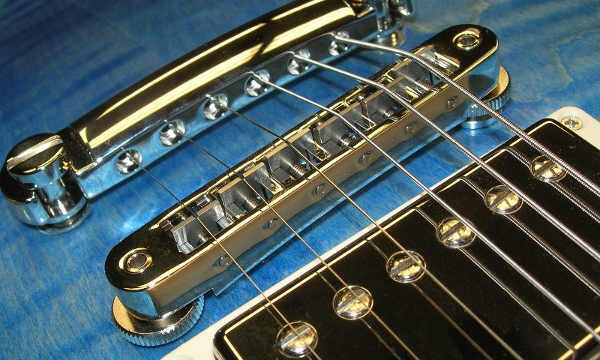 Gibson’s 2015 guitar line, where all the guitars had automatic tuning, didn’t get a lot of love – justified, or not. But they had a feature that was very cool: a zero-fret adjustable nut, which is still being offered – and here’s why I’m glad it is. (Although to this day, I remain a fan of automatic tuning—not because I can’t tune a guitar, but because it saves me time…and time is the most precious commodity there is.)

Prior to 2015, Gibsons had two points for action adjustment: thumbwheels (or screws) on either side of the bridge so you could raise or lower the bridge, and/or adjust the angle. The Tune-o-matic (see above image) is the classic example of this kind of bridge.

However, the Zero-Fret Adjustable Nut changed that by offering height and angle adjustments at the nut itself. Combined with the adjustable bridge, you had four places to adjust action.

Unfortunately the first nuts were made out of brass (as shown in the image above), which was problematic. Later nuts were made out of titanitum, but by that time, the adjustable nut concept had already acquired a sketchy reputation. People didn’t think it was the fault of the material, but the nut. Oh well.

In any event, here are five examples of how an adjustable nut can help accommodate a player’s individual needs.

This player wants really low action on the higher frets, but higher action on the open strings so that power chords ring out like a gong when you hit them hard. Raise action a bit at the nut, and lower at the bridge.

Leave the bridge as it, but raise the nut all the way up so you can slide without hitting the frets. I recently bought a Magslide (very light magnesium guitar slide), and raising the nut is sufficient to be able to play slide guitar on a 2015 Gibson.

If you set both the nut and bridge as low as possible, you can play strings almost by breathing on them. I haven’t been too cconcerned about fretting out, because of the Plek process that allows for lower fret wire—hence, lower action.

Set both the nut and the bridge relatively high, so you can bash away without buzz—and bask in the full power of sustaining strings.

Few factors influence your relationship with a guitar as much as the action. For me, being able to adjust it in more ways than before represented a major improvement in how to customize a guitar’s feel to my specific needs and playing style. I realize the adjustable nut was patent pending, and I don’t know how Gibson feels about licensing it…or even whether they will. But count me in as a fan.