/** * The header for our theme. * * Displays all of the section and everything up till
* * @package protopress */ ?> Use De-Essing to Obtain Better Amp Sim Sounds – Craig Anderton  |  Create · Innovate · Inspire
Skip to content 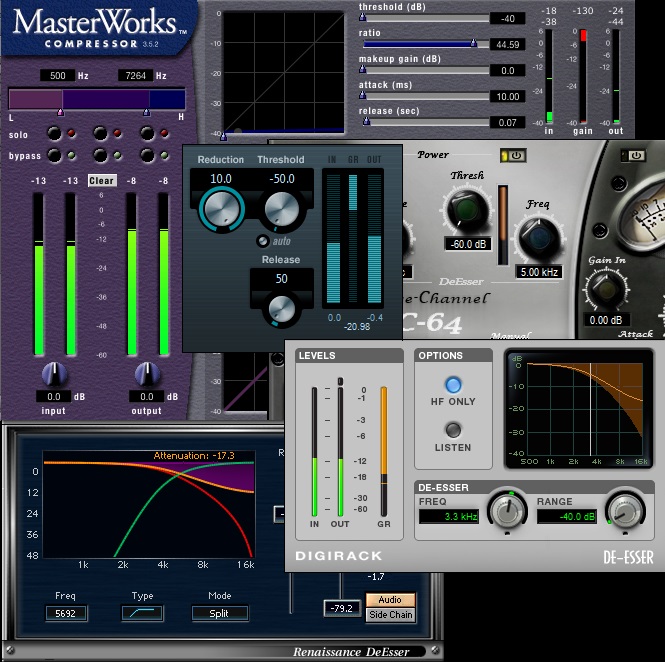 Too much treble can give a harsh sound, but a de-esser can help tame that treble

Feeding too much treble into an amp sim (or amp, for that matter) set for a distorted sound can lead to a harsh, brittle timbre. One solution is to roll back your tone control; although that does reduce the highs, the tradeoff can be a more muffled overall sound. Fortunately, “de-esser” processors provide a dynamically response, “intelligent” way to reduce the high frequencies going into an amp sim.

A de-esser’s main purpose is to reduce vocal sibilants (“s” sounds) by compressing only high frequencies. This lowers the level of the sibilants, while leaving the rest of the vocal relatively untouched. Inserting a de-esser between a guitar and amp sim reduces high frequencies from your guitar when they’re prominent, but otherwise doesn’t affect your signal. As a bonus, the compression adds a little additional smoothness and sustain. Note that in an effects chain, the de-esser is most effective when placed immediately after the guitar, before any other effects

Most DAWs have either a compressor that can provide a de-essing function, a multiband compressor (which can accomplish the same results, and/or a dedicated de-esser module (the image above is a composite of several stand-alone de-essers). If not, you can add a third-party de-essing plug-in.

DE-ESSING WITH A STANDARD COMPRESSOR

A compressor that can de-ess typically has an internal sidechain that puts a filter in the compression detection path, thus filtering out only high frequencies for compression. For example, in Studio One Pro’s compressor, the sidechain section is in the lower right. It’s set to Internal Sidechain Filter, with a low cut filter that compresses everything above 1.88kHz (ratio 20:1, threshold -48dB). This module also has a “Listen Filter” button that lets you monitor what’s being filtered. This makes it easy to zero in on the frequency range you want to compress.

DE-ESSING WITH A MULTIBAND COMPRESSOR

Another way to de-ess is to use a multiband compressor, but compress only the highest frequencies. With Ableton Live’s de-esser, the frequencies above 1.82 kHz are being compressed heavily.

Dedicated de-essers generally have a subset of a full-blown compressor’s controls, with at least Frequency and Threshold parameters. To edit a de-esser when applied to an amp sim, start off with no filtering, set a really low threshold, then slowly extend the high-frequency range that’s being compressed. As you listen to the amp sim output, at some point the sound will become sweeter as the highs start being compressed. If the compression effect is too obvious, raise the threshold and/or reduce the ratio (if present) to give a subtler effect. The only problem you may run into is if the de-esser covers a very narrow frequency range, and doesn’t go low enough for guitar. In that case, a multiband compressor is probably your best option.

In any event, once you dial in some intelligent high-frequency reduction that responds to your dynamics, your reward will be a much sweeter amp sim sound.