/** * The header for our theme. * * Displays all of the section and everything up till
* * @package protopress */ ?> Trigger an Envelope Filter from Anywhere in an Effects Chain – Craig Anderton  |  Create · Innovate · Inspire
Skip to content 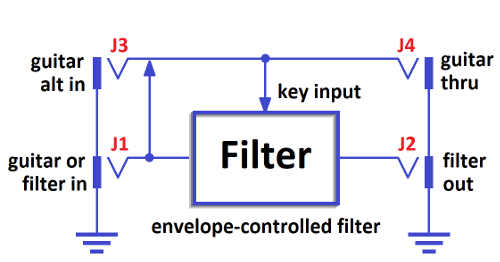 What if you don’t want the envelope filter at the beginning of the effects chain?

Here’s the problem: The envelope follower input wants the dynamic, varying output from a guitar to sweep the filter over a wide range. However, you might want the filter to process a distorted (or compressed) sound, which doesn’t have sufficient dynamics to make the filter do anything interesting. So really, the only effective place to insert an envelope filter is at the beginning of an effects chain.

But if you want the envelope filter to process something further down the effects chain, no problem. Plug your guitar into alternate guitar input J3, and J4 (guitar thru) into the first effect in the chain. Now the filter’s key input connects to the guitar, but because J3 is a shorting jack, J1 becomes an independent filter input and J2 becomes the filter output. So, you can insert the filter anywhere in the effects chain – for example, after distortion.

Simple, eh? Of course, the biggest issue is what do to if you can’t isolated the part of the circuit that feeds the sidechain input. But hopefully, some manufacturer will read this, and steal—I mean, be inspired by—this idea, so they can incorporate it into their hardware.