/** * The header for our theme. * * Displays all of the section and everything up till
* * @package protopress */ ?> More Touch Sensitivity for Compression and Distortion – Craig Anderton  |  Create · Innovate · Inspire
Skip to content 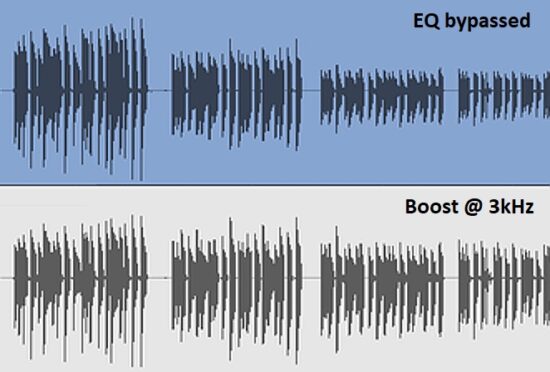 Get more articulation and better touch when playing solos

Compression and distortion are arguably the two most popular effects for guitar. However, guitars often don’t produce as much output with higher strings as lower strings, particularly when playing solos high on the neck. This means that for solos, the distortion is less distorted, and the compression is less compressed. You need a way to increase levels at these higher frequencies.

A stage of parametric EQ is the solution. To start, set the frequency to around 3 kHz or slightly higher, boost to maximum, and Q to minimum (sharpest). This will increase the level of the upper strings, as shown in the screenshot above.

This image shows four identical riffs. The first is played starting on low E, the second an octave above, another octave above that (i.e., starting on the open 1st string), and finally, the octave starting at the 1st string, 12th fret. The lower image shows the same file, but processed with the EQ settings described above. The level of the lowest frequency’s riff is basically unaffected, the second one is boosted somewhat, but the two higher riffs have considerably more level. This makes for a more even, sustained sound with solos played on the higher frets.