/** * The header for our theme. * * Displays all of the section and everything up till
* * @package protopress */ ?> Mackie ProFX16v3 Mixer – Craig Anderton  |  Create · Innovate · Inspire
Skip to content 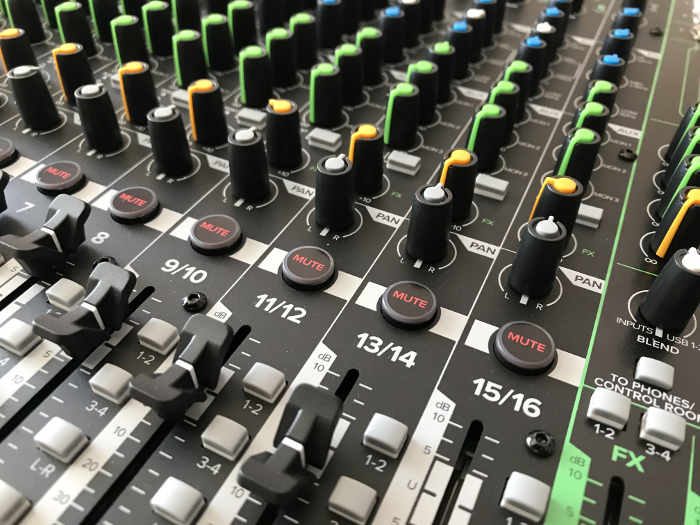 The Alesis ADAT represented the tipping point from analog to digital recording. But what’s often overlooked was the other component in making digital recording affordable: Mackie’s CR-1604 mixer. It was a serious, well-constructed mixer that home recording enthusiasts could afford, and went hand-in-hand with ADAT in re-shaping the music industry.

Mackie has had its ups and downs since its glory days at the turn of the century, but has returned to what it does best: mixers and powered speakers for studio or stage. The ProFXv3 series is an evolutionary improvement over the v2 generation, with various models—choose from 6, 10, 12, 16, 22, or 30 inputs. They all have 2 x 4 USB I/O, a re-tooled effects section with 24 effects, and Onyx mic preamps. You can get all the specs from Mackie’s ProFXv3 landing pages, so there’s no point in re-inventing the wheel here. Instead, let’s look at the line’s gestalt.

The mic pres. All mixer companies tout their transparent mic preamps, which are claimed to have descended from the gods of audio, and are now available to mere mortals. The reality is that…well, actually today’s mic pres are pretty darn good. Mackie was a company that was ahead of the curve on this; their Onyx preamps have always been solid performers. They also deliver 60 dB of gain, which is more than adequate for most condenser and dynamic mics.

+48V phantom power is global for all XLR mic inputs. As long as you don’t use ribbon mics, unbalanced dynamic mics, or plug XLR line outs into the XLR ins while phantom power is on, global phantom power is not a problem—but feel free to use a mix of SM58s and condenser mics if that’s how you roll.

Interface. The trend in mixers is to include a USB interface to allow recording into/playback from computers. The Windows USB driver is ASIO, which means lower latency than Windows’ current drivers (although units can’t be aggregated with ASIO). But a cool feature is that although USB doesn’t interface all channels independently, the 2 x 4 architecture allows feeding two stereo outs from your computer into the mixer. There’s also a Blend control, similar to what you find on audio interfaces where you can crossfade between the mixer’s audio and stereo USB coming from your DAW. You can record with 24-bit, 192 kHz resolution. As to what’s not included, there’s no Bluetooth (although there is an 1/8″-inch stereo input for analog smart phone outputs).

Construction. The unit is solid—it’s metal-based, not plastic. The faders have a 2.5-inch travel. The knobs and faders have a slight amount bit of side-to-side play, which implies that they solder directly to the mixer’s circuit board. However, I don’t think there’s enough play to stress the circuit board, so I wouldn’t worry about it. Furthermore, the knobs have center detents. That kind of tactile feedback can be a big deal under low-light conditions. Most importantly, all the I/O connectors attach solidly to the panel. This is way more reliable than products that depend on a soldered connection to a circuit board to hold connectors in place.

Power supply. On the 12-input and above models, there’s an IEC AC connector—no wall wart. The smaller models use a locking connector, which is also appreciated. All models work on anything from 100 to 240 VAC.

The effects. The 24 effects seem designed mostly for live use, which of course makes sense—if you’re recording, you probably have plug-ins that give the effects you need. The ProFX10 and above have a footswitch for muting/unmuting the effects. The effects are mostly time-based, with an emphasis on reverb and delay, but there’s also overdrive, auto-wah, and flange.

Extras. You get two DAWs—Pro Tools First, and Waveform OEM. Pro Tools First is a basic, 16-track, non-expiring version of Pro Tools that you can get for free elsewhere, but the special sauce here is you also get 23 plug-ins not included with other versions. But Waveform OEM is well worth the install; it runs on Linux as well as Mac and Windows, and is a very capable DAW with few limitations. Compared to the full version, it doesn’t have licensed features like Melodyne or AutoTune. Overall, though, Waveform is a fine, modern DAW and the package includes extra plug-ins. I wouldn’t recommend buying any mixer based on included software, but I can see people trying out Waveform and getting into it if they’re not already committed to a particular DAW.

…But comparisons is what a lot of people want. Fair enough. Mixers along these lines live in a pretty crowded, competitive space, and there are more similarities than differences. All your options will be analog, because digital mixers just can’t hit the same kind of price point. The ProFX16v3 sells for around $500 street, so let’s see what else inhabits that world.

Frankly, you’re not going to go wrong with any of these, but some of the different features may really matter to you—for example, do you need something more mic-based, or are you mostly dealing with line outs from electronic instruments? The Mackie has hi-Z direct ins, which not all mixers do…but which matter if you want to plug in a guitar or bass directly. Eight of the channels have inserts—a feature many mixers lack, but is essential if you use outboard gear for additional processing.

Overall, the Mackie ProFXv3 series has a lot to recommend it. The operating manual is available online, so if these mixers interest you, it’s easy to do a deep drive and uncover every nook and cranny of what the mixer family can do. In any event, there’s no doubt you get value received. There’s a reason why Mackie has made a name for itself in mixers over the years, and this refresh of the ProFX series has added another set of reasons.