/** * The header for our theme. * * Displays all of the section and everything up till
* * @package protopress */ ?> Intelligent Sounds & Music Aroma Plug-In – Craig Anderton  |  Create · Innovate · Inspire
Skip to content 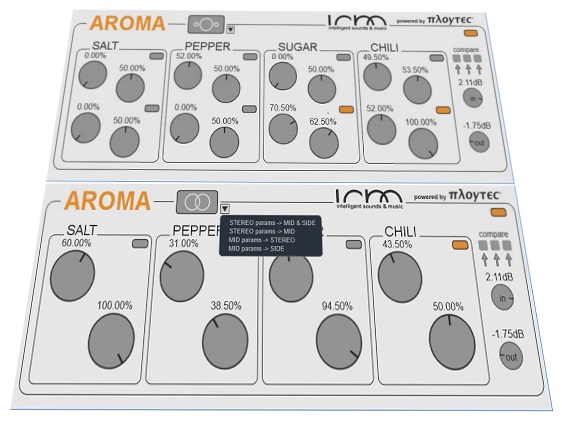 Can a spice rack be a plug-in? Let’s see if Aroma makes scents

There are the pretty-much-mandatory plug-ins, like EQ and dynamics. Then there are the more “bread and butter” ones, like delay and reverb. But some plug-ins are designed to have a subtler role, like console and tape emulation. They’re like the spices you add to a dish for that extra little flavor twist that brings out the flavor, and the name “Aroma” sets the stage for a plug-in that’s the audio equivalent of spices. Inspired by the kind of functionality associated with Cranesong’s acclaimed HDD-192 hardware, Aroma adds the flavor of effects associated with tape, tubes, and other analog processes but does this in a more flexible way than plug-ins that try to emulate only a specific function.

Because a trial version is available (Mac/Windows VST2/VST3/AU/AAX, with challenge/response protection), you can find out for yourself if Aroma adds spice to your life. For my projects, I’ve found Aroma best when when used subtly. However, because of this subtlety, it took me some time to understand which effects and settings were most applicable to particular types of audio files. So, let’s cover what those who choose to download the trial version can expect—and in the process, describe a unique and useful processor for both tracking and mastering.

The four processors, in keeping with the plug-in’s name, are called Salt (emphasizes even harmonics), Pepper (emphasizes odd harmonics), Sugar (tape compression), and Chili (sort of like a more aggressive version of Pepper). Each has an Intensity and Flavour control to alter the sound beyond the basic emulation, as well as a bypass switch. Aroma can operate globally in Stereo or Mid/Side processing modes; with Mid/Side processing, the controls are duplicated for independent control over mid and side components.

Even though the effects themselves are subtle, they can nonetheless increase the level. This makes comparisons difficult unless you match levels precisely when doing A/B comparisons. For example with the Sugar processor, the processed and unprocessed sounds didn’t seem all that different—except that I could increase the processed sound’s level quite a bit before it hit the same peak values as the unprocessed version, which revealed its tape compression-like effect.

Also note that these effects are dependent on input level. You don’t want to exceed the recommended level, so watch the orange ring that illuminates when you’re feeding in too much signal, and use the input control to compensate. I obtained what I thought were the best results when hitting the input as hard as possible, short of distortion.

WHAT THE FOUR EFFECTS DO

Sugar adds body and depth, although as with all the effects, a little goes a long way—in stereo, I gravitated toward Intensity and Flavour settings around 50%. Mid/side processing worked very well on just the sides to widen the apparent stereo image and “fatten” up the sides a bit. This was an effective and very useful process.

Chili “hypes” the sound a bit. I also found this effect useful, but combining mid/side processing with Sugar and Chili had the ability to “lift” a track up a bit. I did my usual A/B comparison method of closing my eyes and clicking bypass so many times I didn’t know if the effect was in or out. When I clicked a few more times to compare, it was easy to tell that the bypassed version was not as pleasing.

I wasn’t really a fan of Salt; it added distortion. While saturation most certainly has its place, given how much I try to get as clean a sound as possible, I use saturation almost exclusively for individual tracks and not masters. However, Pepper was much more to my liking; it created a fatter, bigger sound if not taken to extremes.

Be careful when using multiple processors at once; the effects are cumulative, and the sound canget ugly pretty fast. In those cases, I was better off dialing back the individual effects.

Note that there are options to transfer parameters between mid/side and stereo options, along with three slots to temporarily store and compare various settings. Given how much of mastering—and mixing in general—requires A/B comparisons, this is very handy.

Initially, I wasn’t too sure about Aroma. I would turn the controls up all the way to emphasize the effect, and a lot of times, it sounded worse than the unprocessed audio. But as I learned more about how the processes affected the overall sound, and dialed back the settings to enhance rather than overpower, Aroma added a dimension to a track that I couldn’t obtain in other ways. In that respect, the “spice” analogy is accurate—you can ruin a great meal with too many spices, or use spices to enhance a meal beyond what it would taste like otherwise.

Overall, I don’t necessarily see Aroma as a “must-have” processor, like a linear-phase multiband compressor or a quality “maximizer.” However, for under $100 it provides a suite of effects that can substitute for individual processors designed to produce effects like saturation. Also, the mid/side processing is effective—if you download the demo, make sure you check out what this can do to tracks. For me, mid/side processing is where Aroma has the sweetest scent.

Finally, although Aroma is promoted mainly as a mastering plug-in, do try it on other source material. For example, I found that acoustic guitar, bass, and drum loops could benefit from Aroma’s spices.

It’s definitely worth downloading the trial version to find out for yourself what Aroma can do. Once you learn how to dial in the right settings, you may find there are several ways it can enhance your music.