/** * The header for our theme. * * Displays all of the section and everything up till
* * @package protopress */ ?> How True Bypass for Guitar Effects Works – Craig Anderton  |  Create · Innovate · Inspire
Skip to content 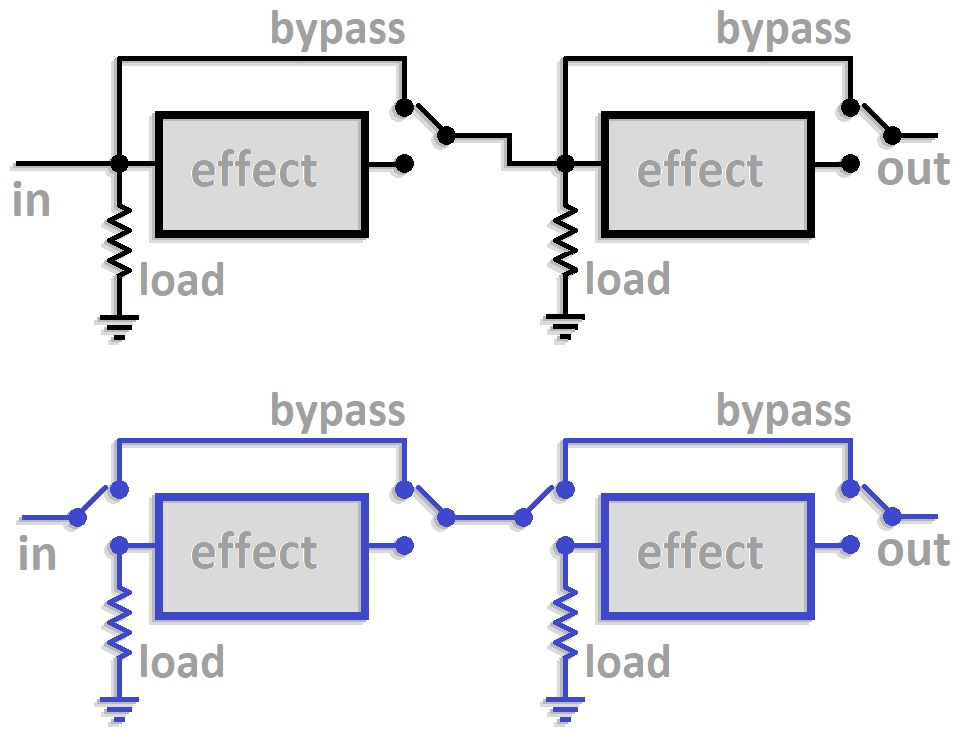 True bypass can improve or degrade your tone

Some people think true bypass is just a marketing ploy, that disregards the fact that true bypass can cause problems with systems that use multiple pedals and long cable runs. However, there are situations where true bypass is preferable to having more active stages between your guitar and amp (or interface).

Referring to the diagram above, the black effects use standard bypass. This switches the output jack from the effect circuitry’s output to the effect circuitry’s input (which also connects to the input jack). So, the input circuitry always loads down your guitar, even when bypassed. If this effect then feeds another effect without true bypass, there will be additional loading.

True bypassing disconnects the load from the circuit when bypassed, because it bypasses the effect’s circuitry by routing the output jack directly to the input jack.

The type of bypassing matters because guitars with passive pickups deliver the most output and high-frequency response when feeding a high-impedance (e.g., 200,000 to 1,000,000 ohms) amp, buffer, or effect input. For example, an input impedance of 10,000 ohms—which can happen if there’s a lot of loading—will diminish output level and brightness considerably.

Another consideration is that if there’s no buffer and the first effect has a comparatively low input impedance (which is the case with some wah pedals and other effects), then you want true bypass so that when the effect is bypassed, its loading is out of the effects chain.

The main issue with true bypassing is that if everything is bypassed, your guitar sound will be degraded by the accumulated capacitance of all your cables on stage. This won’t happen if a pedal is active, because its low impedance won’t be as affected by the cables, so your tone will change unpredictably as you enable and bypass effects. However, assuming your effects have reasonably high-impedance inputs, true bypassing can improve tone in home studios, where short cable runs into high-impedance interface inputs are common, and onstage, with wireless pedalboard-to-amp connections eliminate long cable runs altogether.

So, true bypass can improve your tone, degrade it, or make no difference—it depends on the rest of your effects, their placement in the chain, cable lengths, and whether you use wireless. But if your guitar always feeds a high impedance device that transforms the signal into a low output impedance (via a buffer, effect, or wireless receiver) before your effects chain, true bypass won’t affect your tone much, if at all.