/** * The header for our theme. * * Displays all of the section and everything up till
* * @package protopress */ ?> How to Create a Super Phase Shifter Effect – Craig Anderton  |  Create · Innovate · Inspire
Skip to content 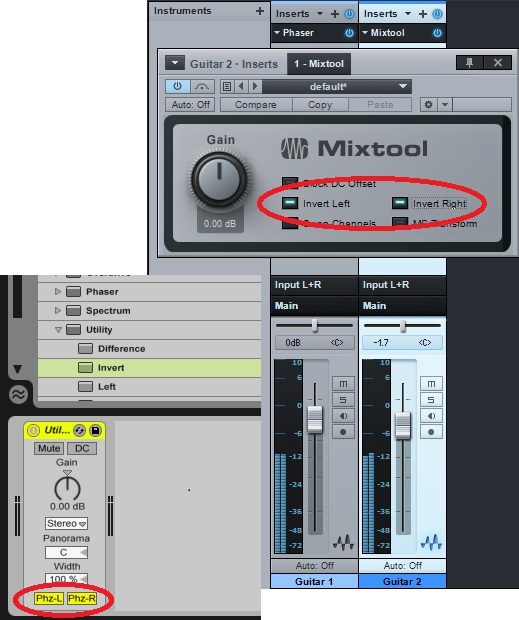 Plug-in software allows for techniques that would be more difficult to do with hardware effects—like create a mutant Super Phase Shifter from any ordinary phase shifter plug-in. The end result is a phaser monster, with a much more pronounced phasing effect, and wider stereo image.

Any recording software is eligible for this technique as long as you can switch polarity (commonly called phase) on audio channels. Old-school hardware mixers had a phase switch, and many software programs include a phase switch in their virtual mixers. If not, the program may include a plug-in that reverses phase, as shown in the image above.

Here’s the step-by-step procedure for creating a Super Phaser.

1. Copy your main audio track to create a second, identical track. Some programs will have a “duplicate” or “clone” command, or you may be able to simply copy/drag the audio into an additional track.

2. Insert your phaser plug-in into the main track.

3. Reverse the second track’s polarity, and turn its fader all the way down.

5. Start playback. As the main track plays, slowly bring up the fader for the second, copied track. As you raise the fader, the phaser effect will become more dramatic, and you’re hear a wider stereo image. Adjust the fader for the desired sound.

This technique’s “secret sauce” is that the out-of-phase, dry audio cancels out any elements in the phase shifted sound that aren’t being modified by the phaser. So, when the levels of the dry signals are equal and out-of-phase, all that’s left is the purely phase-shifted sound.

Due to the cancellation, the overall level will be somewhat lower. Changing the faders individually might upset the balance between the two tracks, so after you’ve found the right setting, it’s a good idea to group the two channel faders. Then when you change levels, they’ll both change together.