/** * The header for our theme. * * Displays all of the section and everything up till
* * @package protopress */ ?> How to Choose Guitar Strings: Tone and Action – Craig Anderton  |  Create · Innovate · Inspire
Skip to content 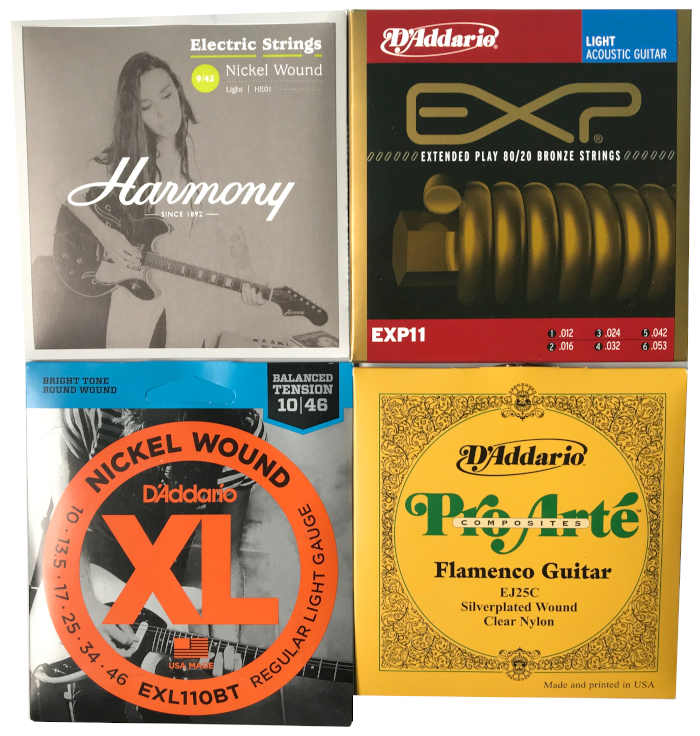 Strings are crucial not just to how you play, but how your guitar sounds

A guitar’s tone starts with its body and strings, both of which influence the overall sound. Strings are an important part of the equation. The string type and gauge you choose will affect how you play, and the sound of your recordings. The only way to know what string is “best” is to experiment. Fortunately, strings are inexpensive enough that it won’t break the bank to find out which type of string gives your preferred sound.

Unwound strings (the high E, B, and G) are made of steel. They don’t differ much in tone, but with wound strings, the winding can affect both tone and string life. The windings go around a steel core, which can be round (this gives a more vintage, fatter tone) or the more common hex core, which produces a brighter sound and slightly stiffer tension.

Regarding the windings, round-wound strings, where round wire wraps around an unwound string, are the most common string type. Harder metals produce a brighter tone. Nickel-plated steel wraps are brighter than pure nickel strings (which sound the warmest), while chrome and stainless steel wraps give the brightest tone.

As strings age, they lose brightness but because nickel-wound strings start off without a lot of brightness, the tone stays more consistent over time. The coating on chrome and stainless steel wraps wears away more quickly than nickel, so maintaining that bright tone requires changing your strings more often (however, a mitigating factor is that they’re harder to break—and are more resistant to corrosion). Also note that harder strings wear down frets faster. If you’re a big fan of harder strings, consider using a neck with stainless steel frets, which are more wear-resistant.

Finally, coated strings have a polymer coating that resists oxidation and corrosion, so they last longer—corrosion is the enemy of both tone and string life. Although coated strings maintain their tone for longer than non-coated strings, they tend to be the most expensive string option. Whether they’re cost-effective depends on how often you change strings.

Another key to maintaining tone is to minimize oils and sweat from your hands. Before playing, wash your hands; after playing, wipe your strings down.

Bronze strings are the brightest option for acoustic guitar, but age more rapidly than other string types. Phosphor bronze strings are somewhat warmer, and because of the added phosphor, resist corrosion more effectively. Aluminum bronze is like phosphor bronze, but with more highs and stronger bass.

Brass strings have a metallic sound quality, while silk and steel strings wrap silk or nylon around the lower strings. They feel softer to the touch, and have a somewhat more delicate tone.

Like electric guitar strings, coated versions are available for acoustic guitars. They have less sustain and brightness, but the warmth can be desirable, and of course, they last longer.

In this case, the tone depends mostly on the string tension. Unlike electric and acoustic guitars that are specified according to the string’s gauge (see next), nylon guitar strings are often classified according to tension—low, medium, or high—instead of gauge. Other terms are used, like light, normal, and hard, but the characteristics are the same.

String gauge (the string diameter) is primarily about action. However, gauge can also affect tone, and the characteristics are different for electric and acoustic guitars. String sets usually specify the gauge in thousandths of an inch for the high E string—for example, a “.010” set means the high E is ten-thousandths of an inch in diameter, with the other strings scaled to provide a similar amount of tension. Shredders and those who want the lowest possible action often choose .008 or .009 sets.

We’re not done yet! After changing strings, stretch them to speed up the process of their staying in tune. Stretching pulls the string tighter around the tuner, which helps take up any slack that was introduced when changing strings. Grab the string around the 12th fret, and pull upward. Re-tune, then stretch again. Repeat this process until the string pitch doesn’t change when you pull upward.And now, you’re ready to start playing.