/** * The header for our theme. * * Displays all of the section and everything up till
* * @package protopress */ ?> Guitar Amps: Combining Virtual and Physical – Craig Anderton  |  Create · Innovate · Inspire
Skip to content 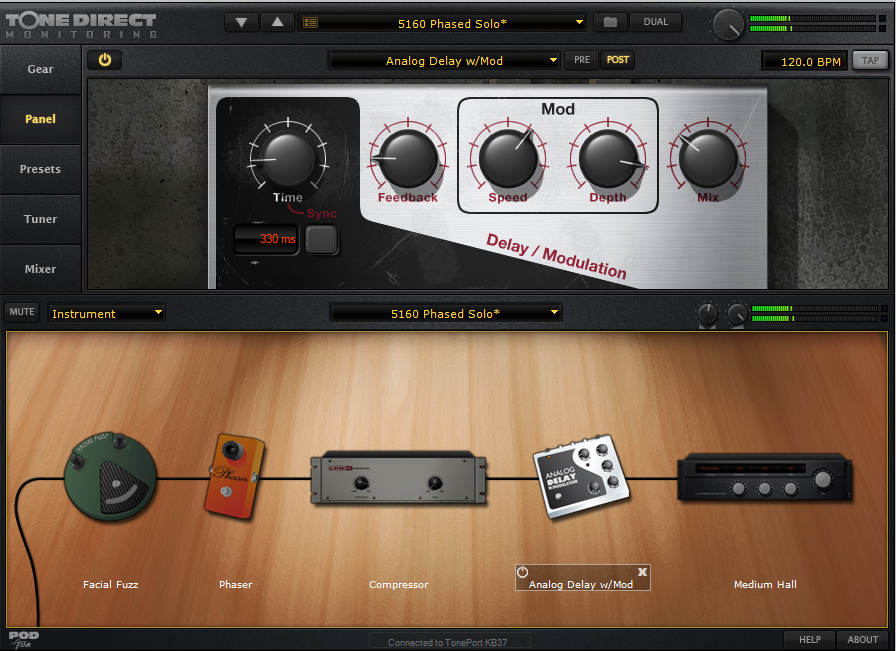 Can’t we all get along? It doesn’t have to be amp sims against physical amps, but instead, with physical amps

No law says you have to use only virtual amps or physical amps; you can get some great sounds by mixing and matching the two technologies. For example…

You love the sound of your amp, but dragging around all those effects, batteries or AC adapters, and cables is a hassle. So, use your laptop’s sim software only for its effects, bypass the virtual amp/cabinet, and feed your trusty amp from your laptop’s audio interface. The main image above shows Line 6’s original POD Farm set up as a simple pedalboard.

You can also use a foot controller with your “virtual pedalboard;” while general-purpose MIDI controllers can do the job, you’re probably better off choosing one that’s designed for your software (e.g., Rig Kontrol for Guitar Rig, Stomp I/O for IK’s AmpliTube, Ground Control for Waves GTR, etc.).

Caution, though: Check your levels. Your amp wants to see a guitar level signal, so you may need to dial back the audio output from your laptop. Or not—maybe you can get a cool overdrive effect by overloading your amp’s input stage. Experiment!

USING A PHYSICAL CABINET INSTEAD OF A SIM

Some guitarists love the concept of amp sims, but want to feel an actual speaker pushing air rather than going direct into a mixer or PA. Fair enough, but the problem here isn’t the virtual amp, but rather, the virtual cabinet. Fortunately, one of the cool aspects of using an amp sim is you can choose from multiple amp types and feed them into your favorite cab.

In this application, bypass the cabinet in your software (Figures 1 and 2).

You’ll still need a physical power amp, though, to drive the speaker(s). If you’re using a standard guitar amp, you may be able to go into an effects loop return and bypass the preamp stage completely. However, odds are the amp will still influence the sound, which may or may not be a good thing. It might be better to choose a simple, accurate power amp, like the kind used to drive non-powered speakers (e.g., QSC, Peavey, Phonic, Crown, Yamaha, Lab Gruppen, Mackie, Alto, etc.). This will reproduce the characteristics of whatever amp you’ve chosen in your amp sim as faithfully as possible.

Similarly, if you like the sound of your amp’s preamp but want the flexibility of using your sim’s amp and cabinet, you can take a post-preamp effects loop output, feed it into your computer’s audio interface, and run the signal through your sim’s amp and cabinet. If you want to use effects, they can insert between the effects loop output and the audio interface input.

SPLIT YOUR GUITAR INTO PHYSICAL AND VIRTUAL PATHS

Yet another option is to split your guitar into two paths, then drive both a guitar amp and an amp sim setup. For example, I often use a Peavey Windsor amp with its “power soak” and emulated out features to reinforce amp sims. Not only can this type of setup give wonderful stereo effects, you can also create a richer, more complex sound.