/** * The header for our theme. * * Displays all of the section and everything up till
* * @package protopress */ ?> Create Vocoder-Like Effects with Multiband Sidechaining – Craig Anderton  |  Create · Innovate · Inspire
Skip to content 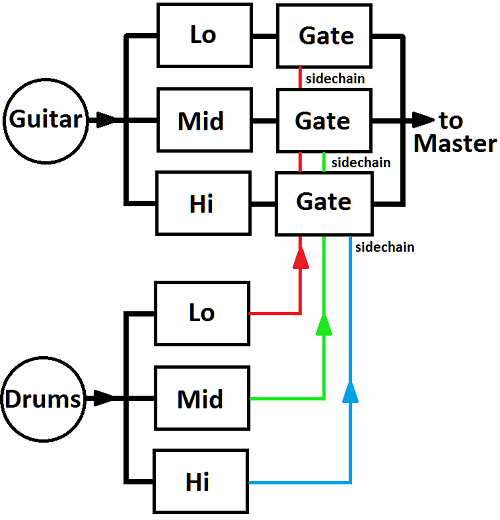 Sidechaining is super-useful—but with a little more effort, you can take advantage of multiband sidechaining

This is a fairly complex setup, but listen to the demo and you’ll hear why I think it’s worth checking out…the effect is almost like using a vocoder to modulate one instrument with another, although in the context of this kind of modulation, the following approach gives you almost infinite possibilities. This technique is ideal for EDM, but it’s something I’ve used in rock and pop as well.

The block diagram above shows the basic concept. Let’s say you want to modulate a guitar power chord with drums. The overview is you split the guitar into three frequency bands, each followed by a gate. Then you split the drums into three bands, and use each band to drive the sidechains on the gates that control the associated bands on the guitar. So when the kick hits, you hear the power chord’s low frequencies, a snare opens the midrange, the high-hats open the highs, etc.

SETTING UP A FREQUENCY CROSSOVER

Now we need to do something similar for the drums, to split it into three bands for triggering the guitar’s gates. Send the drums to three buses, each with its own multiband compressor. Because the multiband compressors are already tuned for the guitar, we can just copy the settings and apply them to the drum compressors. Fig. 2 shows the mixer setup for Cakewalk, but again, other DAWs will be similar. You may need to tweak the crossover frequencies for the drums later on, but you’ll be close.

I find it easiest to tweak one band at a time. For example, mute all tracks except the drum audio track, the guitar audio track, and their low bands. Start playback, and adjust the guitar’s low band Gate to respond to the drums. Now here’s the “but wait, there’s more” option: you can tweak the Gate’s attack, hold, and release time to make the gating more percussive, softer (increase the attack a bit), or even try ducking and other tricks. Similarly, adjust the mid and high frequencies, and you’ll have a heckuva rhythmic guitar chord.

ABOUT THE AUDIO DEMO