/** * The header for our theme. * * Displays all of the section and everything up till
* * @package protopress */ ?> Blue Cat AcouFiend’s Feedback Emulator Plug-In – Craig Anderton  |  Create · Innovate · Inspire
Skip to content 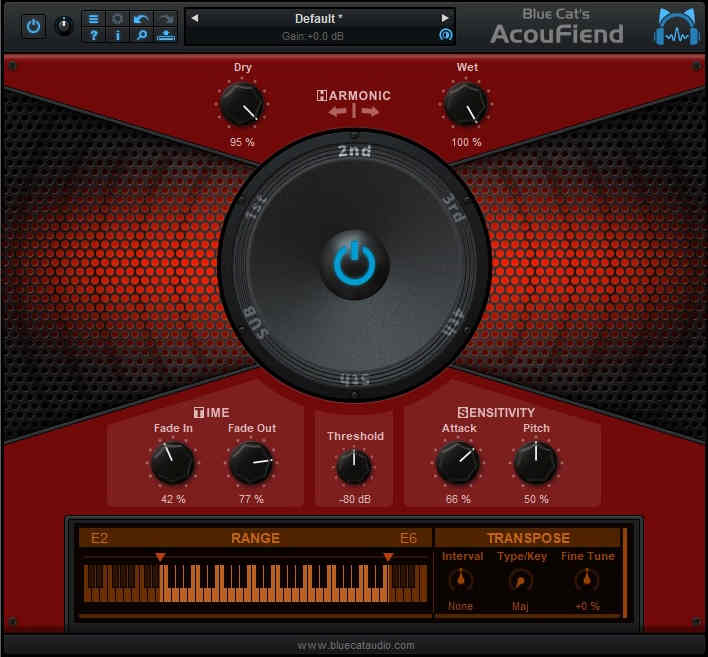 You Can’t Get Feedback with a Plug-In, Right? Actually…You Can

I like off-the-wall products, plug-ins for guitar, and feedback…so here we are. AcouFiend definitely falls under the “why be normal?” category, and when I first saw it at the 2020 Winter NAMM, I couldn’t wait to check it out. As it so happened, it does a lot more than I thought originally.

Every now and then, something comes along that violates the laws of physics—like when Melodyne showed polyphonic pitch correction, or Studio One added harmonic editing that generated chord tracks if you played chord progressions on guitar. And now, we have a plug-in that generates acoustical feedback, like what happens when you hold your guitar close to a speaker, and play really loud.

Until this came along, I had four choices to generate feedback with plug-ins.

But now we have Blue Cat AcouFiend…so let’s find out if it really works.

AcouFiend costs $79/€79, and in typical Blue Cat fashion, supports pretty much anything—VST, AU, AAX, and 32- or 64-bit host software. According to Blue Cat, it will even run on a Pentium 4 Windows machine running 32-bit Vista. (And if that’s what you’re using, you really need to consider that it’s time for an upgrade!) However, if you want to use AcouFiend live, you’ll need a VST hosting program because it doesn’t run stand-alone.

I believe in reading manuals, but to gauge a product’s user-friendliness, I also believe in just trying something out until I get confused. According to my rating system, AcouFiend gets a 5 x 5 – after five drinks at five in the morning, you can still figure it out. I really didn’t need to get into the manual until I ventured into the advanced MIDI functionality (which you don’t really need to know if all you want is guitar feedback).

The main controls are Dry, Wet, and the harmonic you want (1st, 2nd, 3rd, 4th, 5th, or subharmonic). Note that you don’t have to follow AcouFiend with an amp sim, although that does give a more “authentic” rock feedback sound. AcouFiend will also work with an electrified acoustic guitar, although all the harmonics and resonances do tend to be more of a challenge. But that’s not all—it works with sound sources other than guitar (more on this later).

At first, I was a bit surprised that the Dry and Wet levels had separate controls—it seemed a single Balance or Mix control would be more efficient. However, the virtue of this approach becomes obvious if you’re into automation, because you can play with the Wet sound level independently of the Dry one. Also note that if you use only the Wet sound, the resulting sound is kind of like an Ebow.

After getting the sound squared away, you can tweak the feedback effect’s Fade In and Fade Out times. The music, tempo, and style will determine what’s the correct setting, but I did find an interesting use for the Fade In. I sent the guitar to two buses, and inserted an AcouFiend in each one, which were both followed by an instance of the 3rd-gen Ampire sim in Studio One. This allowed setting each AcouFiend for a different interval, with each fading in at a different time. For example, you could have the 2nd fade in fairly quickly, and hae the 3rd or 4th fade in later. This makes the feedback effect even more guitar-like.

For a quick idea of what it sounds like, this link takes you directly to a solo that uses it.

As with anything that seemingly violates the laws of physics, there are some limitations. Of course, AcouFiend isn’t actually driving your stings, so feedback will happen only as long as the string is vibrating. That said, it will work with chords by grabbing a note (not the full chord; usually the root), and provide the feedback effect. In fact if you play a chord, the feedback will continue for a surprisingly long time—as long as there’s some kind of vibration happening, the feedback keeps happening as well.

One limitation of Softube’s Acoustic Feedback is that the pitch had a hard time staying stable toward the very end of a note. AcouFiend has the same limitation, but to a much lesser degree.

The Threshold and Sensitivity controls allowing tailoring the response to your playing style and instruments, but the defaults worked out of the box for me. It’s really quite non-critical, far less so than, for example, the average octave divider. I was able to set Threshold very low to get the maximum sustain, although you’ll need a “clean” signal (minimum hum, clean playing) to get the most out of this.

The Sensitivity controls are more about personal preferences than adjustments to your playing style. Think of Attack as a ducking control for the feedback—you make the feedback go away depending on how hard you pluck the string. Set Pitch to match bending; lower values follow bending, higher values turn off the feedback when you bend.

After you use AcouFiend for a while, you’ll start to “partner” with it. For example, you’ll mute notes past a certain point, because trying to get the feedback to last as long as possible isn’t always appropriate from a musical context anyway. My absolute favorite real-world feedback effect is bending a note up, letting the feedback come in, and then cutting the note and feedback abruptly. This is something Jeff Beck does really well, and AcouFiend’s version of this is pretty much perfect.

I also like letting a power chord sustain until it goes into feedback. Although the full chord doesn’t feed back, one of its notes will, which provides the same kind of overall vibe. I also found a cool technique with 12-string (yes, really). When playing chords, if I let the chord sustain, AcouFiend provides a sort of background “bed.” This can be quite beautiful with just the 12-string by itself—no amp.

AcouFiend works well with synths, although I don’t think I’ll be ditching my “faux feedback” technique just yet. Of course, you can try anything with it for sound design, but it even works with vocals—imagine a sine wave pitch tracking, and you’ll be close. I’ve been experimenting with using it to augment sustained, choir-type sounds and layered vocals. I have found that AcouFiend does want a consistent sound, so I had the best results applying it after using pitch correction to flatten notes. Also, there’s a bit of a pitch falloff at the end of vocal notes that’s more noticeable than with guitar. Although I haven’t found the “killer app” yet for using it with voice, I’m sure there’s one in the AcouFiend toolbox, and I’ll find it at some point.

The scary-looking keyboard stuff toward the bottom is actually pretty straightforward. You can limit the note range that triggers feedback, as well as transpose the feedback, key (as well as major/minor, which affects the third), and fine tuning. Transposition is particularly useful with chords, because AcouFiend’s natural tendency is to grab a chord’s root note.

You can even get a sort of guitar synth sound for solos by setting the controls as shown (Fig. 2). This creates more of a tracking effect for the feedback sound, rather than having it fade it.

The sound is kind of flute-like, but you can create parallel harmonies with additional AcouFiends. Because the attack isn’t instantaneous, the sound lends itself to ethereal solos. If this had existed in the 80s, new age music people would have flipped out.

Although AcouFiend works as advertised—and yes, you can certainly obtain credible feedback effects from it—it would be a shame to think of it as doing only that. Despite what appears to be a limited amount of controls, the overall functionaly is highly customizable, and suitable for more than guitar. I was particularly impressed by using it simply to track guitar, and augment the guitar sound, or pull down the Dry control and create diaphanous harmonies. If you have an experimental bent, or just want to rock with feedback guitar, it’s well worth downloading the free trial to find out what this sucker can do. It’s impressive.