/** * The header for our theme. * * Displays all of the section and everything up till
* * @package protopress */ ?> How to Make Reverb “Bloom” – Craig Anderton  |  Create · Innovate · Inspire
Skip to content 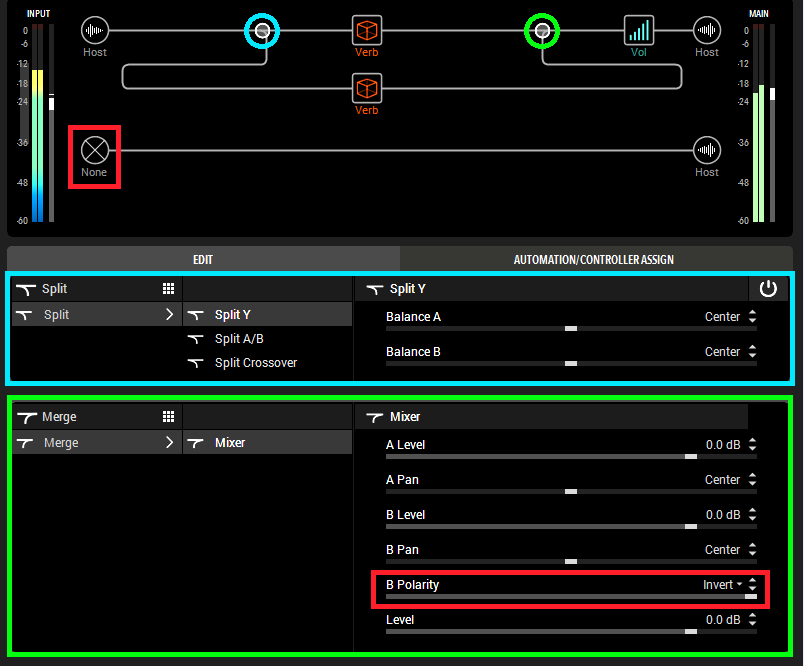 This reverb tweak can be better than pre-delay, and sounds like the reverb effect you hear when you’re on stage

I’m not a huge fan of pre-delay, because it often adds an echo that comes across as percussive in nature. But, I also don’t want the reverb to step on note attacks—so here’s a simple solution.

IMPROVE THE SOUND OF REVERB BY HAVING ITS DECAY “BLOOM”

This is based on my “hot springs” reverb design, published in the Mesozoic era of recording, that got rid of the “sproinnng” at the onset of spring reverb. You place two reverbs with identical settings in parallel, and flip the output for one of them out of phase. Now the two reverbs cancel.

HOW TO CREATE THE BLOOM EFFECT

The above image shows this concept implemented in a Line 6 Helix preset, but you don’t have to use a Helix. I specifically chose it because the user interface presents this as an easy-to-parse block diagram you can apply to your reverb of choice.

In the Helix, the input goes into a Y split (circled in blue, with the parameter settings outlined in blue). Each split goes into a reverb—Hall is a good choice—with identical settings, then a mixer (circled in green, with the parameter settings outlined in green). The crucial elements are outlined in red: set the second, parallel signal path input to “None,” and the Mixer’s “B Polarity” parameter to “Invert.” It’s also important to set both reverb Mix parameters to 100%, and both reverb Level parameters to +6.0 dB. Finally, note that because of the cancellation, the overall reverb level is relatively low. The post-mixer Gain block can increase the level.

As to how to use this in a DAW, like traditional reverbs, this works best as a send effect (also called an aux or bus effect). Insert it in a bus, insert a pre-fader send into the channels that should have reverb, and send the pre-fader signal to the reverb bus.

With the channel faders down and the bus fader up, you shouldn’t hear anything because the mixer inverts the phase for one of the reverbs, so the sound cancels. Now open one of the reverb blocks, start playing, and increase the decay time (for example if one reverb is set to 3.5 seconds of decay, set the other one to 7 seconds). The initial attack will cancel, but as the decays become more dissimilar, the reverb will start to bloom. Finally, bring up the channel faders for the desired balance of dry sound and reverb—you’ll be rewarded with a beautiful, liquid, ethereal-sounding reverb.