/** * The header for our theme. * * Displays all of the section and everything up till
* * @package protopress */ ?> Audified MixChecker: Hear Your Mix in the Real World – Craig Anderton  |  Create · Innovate · Inspire
Skip to content 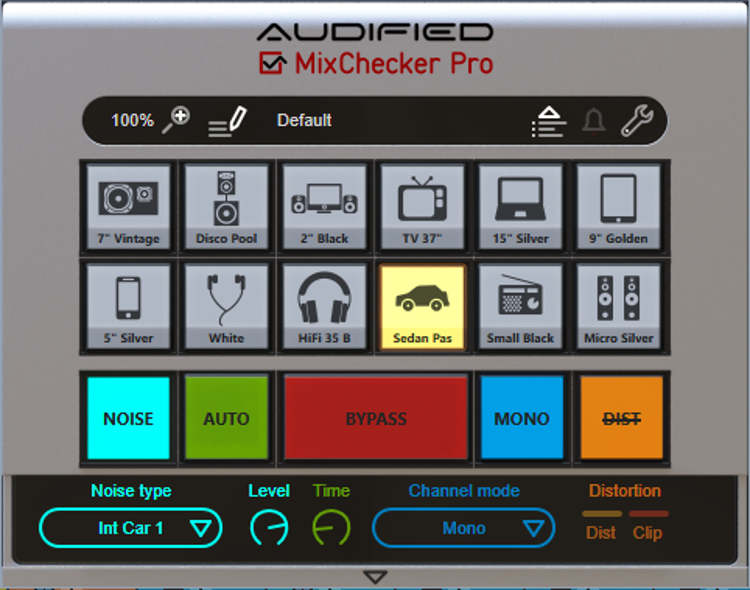 Your mix sounds great in the studio – but what will it sound like in the hands of consumers?

As soon as your mix leaves the studio, all bets are off on how it will sound on playback. Laptop speakers nuke the lows, headphones have wildly varying frequency responses, smartphones speakers are optimized for voice, cars are not an ideal acoustic space, and earbuds are the main way some people listen to music. The days of people sitting down and listening over a fantastic stereo system aren’t necessarily over, but a lot of people listen to music on the go – and that usually means a less-than-ideal playback system.

Before MixChecker became available, I would make multiple copies of final mixes, and play them over as many playback devices as possible. MixChecker and MixChecker Pro make this process more efficient and easier. Let’s start with MixChecker, and then look at the Pro version.

MixChecker doesn’t emulate specific speakers and rooms. Instead, Audified measured multiple examples of each listening device, and took an average. This makes sense, because these various types of devices rarely have the same response, but they do share particular characteristics. Since the goal is to give a reality check for different types of playback devices, not specific devices. Mixchecker accomplishes what it sets out to do.

MixChecker Pro builds on the original with a more comprehensive implementation. However, we’ll look at general applications before covering the Pro version.

Typically, you’d insert MixChecker in the master bus, then compensate for your particular monitoring system with one of the three compensation buttons—5-inch speakers, 8-inch speakers, or headphones. (However, note that MixChecker Pro has removed these, because they’re not necessary with decent monitoring systems.) Then, click through the various buttons to hear what your mix will sound like in the real world. Note that you can also use MixChecker to provide lo-fi special effects—if a movie shows someone listening to music on a smartphone, you can create that sound.

Both MixChecker versions use iLok copy protection. However, you don’t need the hardware dongle, just the License Manager software. Audified provides two authorizations per purchase, so you can use the plug-in at the same time on two different computers. This is helpful if you’re part of a team working on a project.

The pro version (see the main image above) includes several features that enhance the original MixChecker improves on the original in several ways.

Do We Really Need this, or Is It Overkill?

MixChecker is a modern version of the speaker switchers big studios used to have, where they’d switch off the main monitors, and do reality checks on consumer-grade speakers. Of course, Mixchecker offers a lot more options, which is necessary to accommodate the proliferation of consumer-oriented playback devices.

The original MixChecker is still great for quick checks. I thought MixChecker Pro might be overkill, particularly because it offers so many options—I didn’t want to go down an editing rabbit hole. However, the customization options actually made it easy to select the targets of most interest to me. For example, I check the audio for my YouTube videos over laptops, tablets, earbuds, TV soundbars, and speakers; I don’t expect people to watch videos in their car. On the other hand, the car audio options are important with mastered music.

An unfortunate byproduct of the MixChecker experience is that it can be disheartening to hear your carefully crafted, meticulously mixed audio a simulated lo-fi playback systems. But forewarned is forearmed— sometimes even a minor tweak can help your program material sound better over a wider variety of systems, without negatively impacting those systems over which the audio sounds inherently good.

If your mix can survive all these different playback scenarios, the listener will at least hear an approximation of what you intended—which means you’ve created a truly transportable mix.