/** * The header for our theme. * * Displays all of the section and everything up till
* * @package protopress */ ?> All About Layering Guitars – Craig Anderton  |  Create · Innovate · Inspire
Skip to content 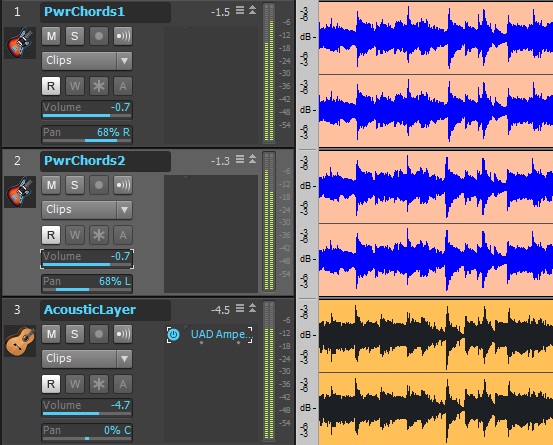 Overdubbing multiple rhythm guitars, called layering, is a common technique that’s supposed to give a “bigger” sound. But is that invariably the case? There’s more than one way to layer guitars—and these tips will help you choose the right approach.

LAYERING MAY NOT BE NECESSARY

Some guitarists reflexively layer guitars, but ask yourself whether it’s really necessary. As a friend of mine once said, “As soon as you put on that second guitar part, you’re going in the wrong direction.” That’s not always true, but I know what he means: A single guitar part has definition, and can stand out in a track as a distinct sound. Layers are more indistinct, as the parts can “step on” each other. Sure, there are situations where layering is great—but Jimi Hendrix almost never layered, except for doing overdubs as a sort of counterpoint; one guitar part said what needed to be said. If a part doesn’t need to be layered, don’t.

For this, set up different layered sounds—like splitting a guitar into two cabs, miking each one separately, then panning them opposite of each other (of course, this is very easy to do in the “virtual world” with amp sims). Layering in this manner preserves the distinct nature of each sound, and lets them stand on their own—yet the two parts will multiply into something bigger. Often when mixing with other instruments (e.g., piano) playing, I’ll pan one amp cab left and the other to center, with left piano panned center and right piano panned right. This makes for a big, distinct soundstage.

LAYERING CAN ALSO GIVE “SMALLER” SOUNDS

Paradoxically, layering can actually give “smaller” sounds that sit better in the background, particularly with power chords. To do this, layer by overdubbing the same sound, using the same guitar, panned to the same position. The parts will tend to blur into more of a texture, and if mixed at moderate levels, will sit in a track as a more background than foreground part. To place it even further back, roll off the highs just a bit for warmth, and pull back a little on the low end to leave more room for the bass and kick—this gives the textured part its own sonic space.

In mixes where there aren’t a lot of other instruments playing, then you can mix the guitar tracks up, and not roll back highs and lows. This gives a full, churning sound—check out the first Sex Pistols album for a great example of how this kind of layering can drive a song when mixed high.

If you really want to push a chorus, don’t reach for another overdub of fuzzed-out power chords—grab an acoustic and layer it instead, as shown in the image at the top. The percussive, bright nature of the acoustic will serve as a perfect complement to the distorted power chord sludge. Combining clean acoustic and distorted electric guitars worked for Led Zeppelin—it can work for you, too.