/** * The header for our theme. * * Displays all of the section and everything up till
* * @package protopress */ ?> Advanced Tremolo Techniques – Craig Anderton  |  Create · Innovate · Inspire
Skip to content 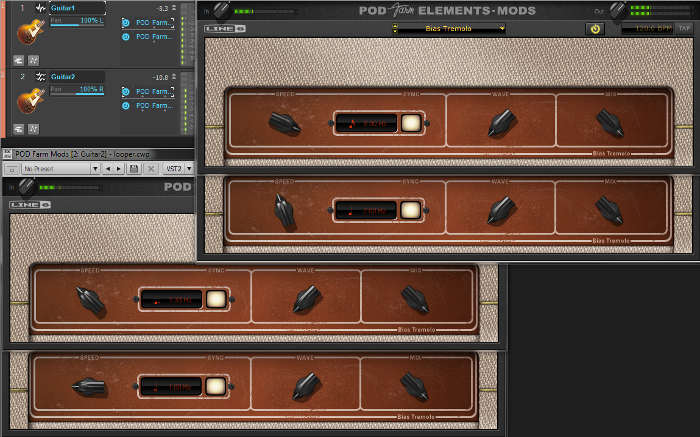 Tremolos have come a long way since surf music, and they can add rhythmic spices to any kind of music

Today’s plug-ins offer numerous rhythmic possibilities for incorporating tremolo effects into rock and EDM—and these have little to do with the vintage tremolo effects of the past. To do the following effects, it’s crucial that you can lock the tremolo rate to the rhythm. This requires that the tremolo and host tempo synchronize, usually from a sync button (Fig. 1). Enabling this lets you set a rhythmic note value for the tremolo’s period instead of specifying a rate in Hz.

The simplest option is to insert two tremolo plug-ins in series. I usually set the first tremolo in the chain to a fast “chop,” like 16th notes. The second tremolo gates this at a slower rate, such as quarter notes, to produce quarter-note “pulses” of 16th notes. A selectable LFO waveform offers even more options; for example, a square wave gives tight volume transitions, while a sine or triangle wave produces gentler volume transitions (Fig. 2).

This tremolo effect also lends itself to stereo. Split your instrument to two tracks (copy it to a second track, or to a pair of buses). Because the tremolos in the two tracks can have different timings, panning the tracks oppositely creates rhythmic effects that bounce back and forth in the stereo field. The feature image at the top shows an example using POD Farm Elements in Cakewalk, but other plug-ins and DAWs work similarly.

This effect can work well with bass (include a fair amount of dry signal to retain a solid low end), because it adds a rhythmic quality that locks the bass to the drums, thus propelling the song even more. This same kind of technique is also useful for background rhythm guitar parts.

Also try adding a time-based send effect, like echo or reverb. Use series tremolo to chop the signal going into the time-based effect; only those sounds that pass through the tremolo will be processed. Chopping after reverb can also provide cool results.

As pop music continues to get more rhythmically-oriented, being able to overlay rhythmic effects with guitar, piano, and other “traditional” acoustic or electric instruments, gives the best of both worlds: the instrument’s organic, expressive qualty combined with rhythmic effects that provide a modern flair. Give this technique a try, and you’ll likely find plenty of places where your music can benefit from a rhythmic turbocharge.