/** * The header for our theme. * * Displays all of the section and everything up till
* * @package protopress */ ?> 10 Common Guitar Recording Mistakes – Craig Anderton  |  Create · Innovate · Inspire
Skip to content 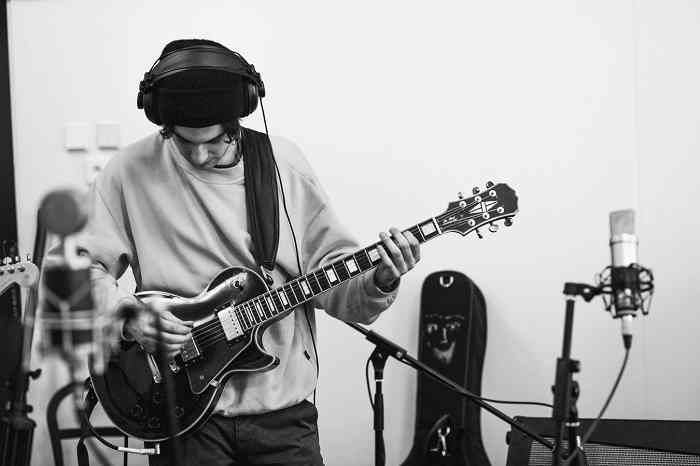 The recording process is difficult enough without looking for trouble

Let’s look at ten easily avoidable recording mistakes that are often made with guitar. Avoid these, and your tone will be much happier!

2. Not paying attention to noise pickup

“Pickups” are appropriately named, because they pick up a lot more than strings — like buzzes, electrical hash, dimmer noise, and the like. The good news is that the pickup is directional, so re-orienting the guitar’s position can make it less prone to interference. Don’t use your ears; look at the meters, because the levels will (hopefully) be really low. If the noise is around –45dB, it may not sound obvious, but it will be if you start adding effects like compression. Try moving the guitar position, and you may be able to get that noise down much further…or use Fishman’s Fluence pickups, which are highly noise resistant.

3. Not checking for mono compatibility

It’s getting easier and easier for recording software to accomdate external hardware, so why not use that XYZ 102 flanger, with the  s u p e r w i d e  stereo spread? Here’s why: the odds are good the way they get that stereo spread is by flipping the phase 180° on one of the output channels. This may be alright live, but when the signal gets re-combined in mono, portions of it (maybe even all of it) will disappear. This can also happen with stereo mics on a single sound source, so always check what a track sounds like in mono before you sign off.

4. Turning up your amp too high

We all know that you need to turn an amp up to a certain point to get a good “tone.” But you’re not filling a stadium, you’re recording. Turn up the level too much, and the room will have more of a tendency to rattle, and this can also emphasize poor room acoustics. Amp sims aren’t immune, either: do you really need the Drive control turned up that high, or would backing it off give more definition?

5. Not playing a part twice instead of using “automatic double tracking.”

WithAutomatic Double Tracking, a processor copies your signal, delays it a bit, detunes the copy to “humanize” it, then recombines it with the straight signal. Although ADT can provide a useful variation on chorusing, nothing substitutes for doubling a part by actually playing it twice. Furthermore, when you record each part on a different channel, you can spread the stereo image—one track more right, the other more left—for a bigger, more enveloping sound.

6. Mixing direct and miked signals without compensating for delay

Sound travels at about 1 foot per millisecond, while electrons move at about 982,000 feet per millisecond. So the miked signal arrives at your mixer at the speed of sound, while the direct signal arrives at the speed of light. If the mic is one foot away from your speaker, zoom in on the tracks and shift the miked signal ahead in time by about a millisecond until they line up. This avoids thinning out the sound, and is particularly important with bass.

7. Becoming a creature of habit

You found a condenser mic that sounds great on acoustic guitars, and have a favorite dynamic mic for amps. And you’ve used them forever. But maybe you need to experiment. For example, when I first tried a Royer ribbon mic, I was surprised at how good it can sound on a guitar amp. And I once got an ultra-fat acoustic guitar sound with a dynamic mic. Just don’t do anything dumb, like placing a super-sensitive condenser mic in front of an amp blasting at the levels of a Saturn 5 booster rocket.

Tubes fail, tubes go soft, and they sometimes do it just before you start recording. Remember too that if one tube of a matched set fails, you need to replace them both. It’s good practice not to trust the tubes you buy, but to try them out immediately in your amp to make sure they actually work. Once you’re satisfied they’re okay, pull them out and save them for when they’re needed.

9. Using the wrong power supply with a stompbox

If you record with a stompbox that can use batteries or AC, try both and see which sounds better. With some old stompboxes, the AC adapter might add some noise or buzz that batteries will eliminate. Conversely, if the batteries aren’t super-fresh, the lower voltage may degrade tone. Also, note that rechargeable batteries sometimes peak out at a slightly lower voltage than alkaline types. Normally this shouldn’t make any significant difference, but if you use rechargeables (which is indeed a good idea), make sure that the sound is equivalent to what you get with standard alkaline batteries.

10. Not paying sufficient attention to tuning

This isn’t just about tuning up before the session – have you adjusted bridge intonation lately? Just changing strings can be enough to throw the intonation out. You may not notice that there’s any problem until you start recording, and everyone’s listening to your guitar under the audio equivalent of a microscope. Few things can destroy a session faster than having to adjust intonation on a guitar with dead strings, because it will be next to impossible to get it in tune. Tempers will fray, harsh words may be exchanged. And while you’re at it, leave a tuner in-line at all times, or use the tuner that’s included in most software these days. It’s better to take 30 seconds to check tuning before recording a part, than having to re-record the part because the tuning was off.