/** * The header for our theme. * * Displays all of the section and everything up till
* * @package protopress */ ?> Maschine: A Powerful Tabletop Multieffects – Craig Anderton  |  Create · Innovate · Inspire
Skip to content 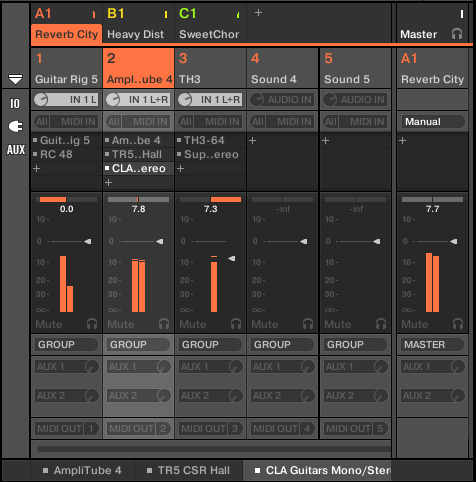 Can Maschine really be a flexible guitar and bass processor? Yes!

Maschine is Native Instrument’s hardware/software system that comprises a sampler, arranger, mixer, effects, and audio interface. Although designed for the groove/dance/DJ market, it has some hot potential as a multieffects for keyboards, guitar, or bass. We’ll focus on the guitar potential in this post.

Maschine can host VST plug-ins, including amp sims like Guitar Rig, TH3, and AmpliTube. Although it doesn’t yet have native support to host VST3 plug-ins, there are several wrappers that provide a workaround. For parallel effects, you can load plug-ins in up to 16 Maschine Sounds/Mixer Channels (see the screenshot above). These channels can also hold series effects, and you can solo or mute individual channels.

These capabilities make Maschine a powerful multieffects for guitar or bass, with multiple possibilities for parallel, series, and parallel/series effects chains. (And of course, Maschine’s intended purpose is pretty cool for making killer backing tracks.)

However, for guitar level instruments, despite being an audio interface Maschine MK3 has no instrument input. It has Mic and Line inputs, but they both load down the guitar’s pickups. This dulls the sound, and lowers the guitar’s output level. Furthermore, the Line inputs don’t have enough gain for guitar, while the Mic input has too much. Sure, you can buy a preamp and plug your guitar into the line inputs, but there’s a simpler – and way cheaper – solution.

Fortunately, Maschine MK3’s mic input was designed for dynamic microphones, and has a flat response. So for about 10 cents, a guitar cord, and some soldering, you can make Maschine guitar-friendly-without modifying Maschine, or giving up the mic input functionality. Figure 1 shows a “Maschine interface” cable, with a 390k resistor in series with the hot lead at the guitar end. The other end plugs into Maschine’s mic input. The resistor raises the input impedance the guitar sees, while simultaneously attenuating the signal so that the guitar won’t overload the mic input.

Figure 2 shows the plug mod, prior to adding some electrical tape to isolate the cable hot lead from the plug hot lead.

The cable acts like a standard guitar cable, except that plugging the end with the resistor into the guitar gives slightly lower hum and noise pickup (although it still works fine if you reverse the plugs). With this cable, the mic input control accommodates anything from low-output to high-output pickups. The 390k resistor value isn’t that critical, because you can trim the mic input. Lower this value if you can’t get enough preamp gain, or increase the resistance if you hit the strings hard (or use high-output pickups).

If you have Maschine MK3 and play guitar, you want this! And if you’re into beats and guitar, then you might want Maschine MK3 on your wish list.