/** * The header for our theme. * * Displays all of the section and everything up till
* * @package protopress */ ?> Zivix Jamstik Guitar Trainer: Hot MIDI Controller in Disguise? – Craig Anderton  |  Create · Innovate · Inspire
Skip to content 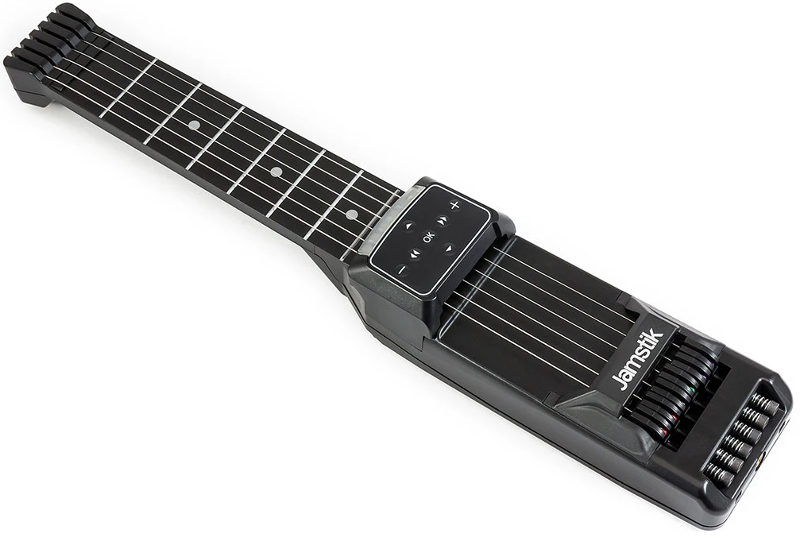 MIDI guitar has always been tantalizing, but never quite fulfilled its promise. Then again, there are workarounds…

MIDI guitar has always been a bit of a holy grail for the music industry. There are so many guitarists, and wouldn’t they like their guitar to be able to sound like a piano, drums, organ, synthesizer pad, sampled sound effects…

The Problem with MIDI Guitar

It turns out the answer is yes, they would, but no, MIDI guitar is just too specialized for most people. Converting a guitar so that it can produce MIDI data is a daunting, complex task. Aside from the latency involved in measuring a note’s frequency, analyzing it, and transforming it into data, there’s also the issue of guitar strings not being as clean as a keyboard’s on/off key switches. Any kind of expressive or idiomatic guitar playing is bound to produce a flurry of glitches, which if you’re recording into a DAW, need to be cleaned up.

So, some companies have decided to do an end run around the problem by producing MIDI controllers with the “look and feel” of guitars, but which aren’t really guitars. Jamstik is one such offering, and like all aspects of MIDI guitar, it has its pros and cons.

The 2020 Jamstik: Not Your Older Sibling’s Jamstik

The Jamstik has evolved over the years. The latest model, which sells for around $200, has a D-pad that sits over the strings between the neck and where you strum, which makes it much easier to program. Although it’s still sold primarily as way to learn guitar, it sends standard MIDI data that makes it suitable as a MIDI guitar-type controller for Mac, iOS, and Windows. With Windows 10, it also works with Bluetooth Low Energy (BLE) so you can play wirelessly as well as wired. There’s an iOS app for learning guitar, and the play.jamstik.com portal allows playing on Mac or Windows with Google Chrome.

Before getting too excited, note there are only seven frets (although this improves over the original’s five frets, and you can transpose octaves and semitones to cover a wider range) and sketchy pitch bending. However, Jamstik uses physical strings—and even though they’re triggers that don’t actually generate notes, in conjunction with the neck and frets they provide a guitar-like feel. What’s more, the Jamstik sends very “clean” MIDI data streams. The tracking is excellent because there’s really nothing to track, the velocity response has good dynamics, and you won’t have to do the cleanup associated with MIDI-retrofitted traditional guitars (Fig. 1).

The Jamstik iOS app allows tweaking velocity response and other attributes. There’s no equivalent Windows app, but Jamstik stores any changes made using a supported host, so you can tweak the settings on your iPhone or iPad, and those settings remain when sending MIDI to a Windows DAW. You don’t need an app to change octaves, initiate tap or pitch bend mode, or choose the MIDI mode because physical buttons can do these functions.

Because the controller is physically small, it’s harder to work with than a standard guitar, and you’ll need to use the included strap…you get used to it after a while.

Tips on How to Use Jamstik

Jamstik defaults to sending each string’s data on its own channel—the best option, assuming the target synthesizer is multi-timbral and can produce sounds on different channels. These sounds can be the same (e.g., copy the same voice for multiple channels) or you can do tricks like set the 5th and 6th strings for an octave-lower bass sound. For best results, set each synth channel’s polyphony to 1 so it plays one note per string, like a guitar. If your synth isn’t multi-timbral, a Single MIDI Channel Mode can send data from all strings over one channel.

Glitches aren’t really an issue, although it is possible to generate sub-20 ms notes on attacks that aren’t problematic but also not needed. Many DAWs can nuke all notes under a certain velocity or duration, which simplifies cleaning up the data. Also, Jamstik generates DAW-irrelevant controller data; filter out controller data at your DAW for a slimmer data stream.

Where Jamstik shines is playing pads and rhythm guitar chords, although you can transpose up and play solo lines for leads. It’s not the only option for MIDI guitar—I’m a big fan of the late, great YouRock guitar that you can still find used if you look around—and there’s always the Fishman TriplePlay for retrofitting standard guitars. But you might be surprised at how easily the Jamstik turns your guitar muscle memory into synthesizer sounds.