/** * The header for our theme. * * Displays all of the section and everything up till
* * @package protopress */ ?> IK Multimedia iRig Pro Mobile Audio/MIDI Interface—The Sequel – Craig Anderton  |  Create · Innovate · Inspire
Skip to content 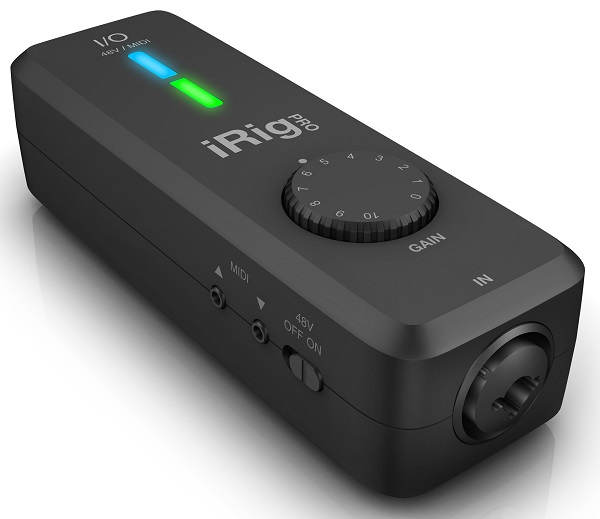 This versatile mobile audio interface has not only stood the test of time, but offers several improvements compared to the original offering

When iRig Pro I/O first appeared in 2017, I reviewed it for Harmony Central. However, one of the problems with writing reviews is that you often don’t know how something will turn out in the long haul—sometimes you’ll find some hidden flaw, and sometimes you’ll find that something that really stands the test of time. .

Over the last two years, iRig has undergone some notable changes, and has proven itself by becoming my go-to interface for mobile applications. It’s just so darn useful and versatile…sounds good, too. The $149 street price tag is higher than basic mobile interfaces, but you get your money’s worth.

Designed for operation with MacOS, Windows, iOS, and Android, iRig Pro has two main claims to fame. The first is I/O. It has a Neutrik combo connector for 1/4” or XLR connectors, MIDI in and out 1/8” stereo connectors, and 1/8” stereo output (yes, you can use your fave analog headphones with an iOS device). Cables for interfacing the MIDI in and out/thru jacks to standard 5-pin DIN connectors come with the package. iRig Pro also has +48V phantom power for the mic, and unlike some interfaces I’ve tested where +48V actually means +35V, this delivers +49V so it can make any condenser mic happy.

A DC in power jack accommodates IK Multimedia’s iRig PSU 3A adapter, which is an extra $39.95. IK is insistent on using their 5.4V DC supply because it can charge iOS devices while in use, and that puts certain constraints on the supply. In any event that’s a big deal feature (as you’ll know if your iOS device ran out of power while an interface was plugged into its lightning port), so if you use iOS, it’s worth the extra expense. It also means you don’t have to buy Apple’s Lightning Dock (also $39.99), which has gotten mixed reviews from owners anyway.

The second claim to fame is audio quality. It uses a discrete preamp, 24-bit kHz conversion, and takes advantage of the fact that even the converters in a $149 “street” unit like this give very credible sonic results. It supports 44.1/48 kHz/96 kHz.

WHAT THE PACKAGE INCLUDES

The package is quite complete, and consists of the unit itself, two batteries, the aforementioned MIDI cables, and cables that mate the unit’s multipin connector with USB or Lightning connector (in other words, don’t lose any of the cables—you won’t find replacements at Best Buy). There’s no cable for older iOS devices with the 30-pin connector, although you can buy an optional-at-extra-cost adapter cable from IK, or use the standard workaround—patch in the Apple camera kit to your older iOS device, and treat the iRig Pro as a USB device.

The user interface consists of an input Gain control, and two LEDs that change colors based on what’s happening; one indicates phantom power and MIDI activity, the other power and audio level. For example, the Power/Audio Level LED is dark blue when connected and on standby, bright blue when active, green when it senses signal level, orange for optimum signal level, and red for “turn the input gain down.” A nice touch is that according to IK, the red phantom power LED blinks when the battery runs low. However, the batteries I used never got low enough to verify this.

CONNECTING TO YOUR SYSTEM

With USB, iRig I/O is bus-powered. Although there’s a compartment for two AA batteries, they’re needed only for iOS or Android devices, or if you need phantom power. The ¼” input jack is mono only.

IK says the iRig Pro works with ribbon mics, but according to the specs, the maximum amount of gain is 47 dB—not enough for those ribbon mics that are happier with 65 dB to 70 dB. If using particular ribbon mics with iRig Pro is crucial, try before you buy.

One of my favorite features is that not only can you monitor the output of an app like AmpliTube on headphones connected to the iRig Pro’s headphone jack, you are able to once again use your favorite 1/8” jack headphones with  iOS devices having a Lightning connector.

In the two years since iRig Pro was introduced, IK has developed its own ASIO driver, so you no longer need to use the dreaded ASIO4ALL. It also works fine with Windows’ WASAPI shared mode, for latency in the 10-15 ms range. However, it doesn’t seem compatible with WASAPI exclusive mode, which otherwise gives around 7 ms of latency.

As to Android, operation is inherently less predictable than with iOS, due to Android’s more open architecture. Your phone or tablet needs to be running Android OS 5 or later with USB digital audio capabilities, and you’ll also need an optional-at-extra-cost Micro-USB-OTG to Mini-DIN cable (about $30 from IK).

“Free” is everyone’s favorite price…and like most IK products, registering gets you free software. This collection is especially noteworthy if you don’t already have IK’s virtual instruments and processors. By registering, for iPhone or iPad you can upgrade the free AmpliTube CS app to the paid AmpliTube Essentials Bundle for free. For Mac/PC, you’ll have AmpliTube 4, SampleTank 4 SE, SampleTank 3 SE, T-RackS 4 Deluxe, Mic Room (mic modeling module for T-RackS), and 25 gear credits for the IK custom shop. As expected, there’s no free software for Android.

There’s absolutely no question iRig Pro is a well-designed piece of gear from both an audio and compatibility standpoint. I love that it overcomes the limitation Apple imposed on the iPhone where everything has to be done through the Lightning connector (even though it will cost you another $39.99 for the Apple-friendly power supply).

With Windows, having a dedicated ASIO driver is great, but don’t overlook the ability to work with WASAPI Shared mode—sometimes native Windows drivers let you do things ASIO won’t (like aggregating interfaces). iRig Pro has a lot going for it. The unit itself is light but rugged, with a slightly “rubberized” feel. It’s compact, reasonably priced, and solves several issues when you want high-quality, mobile interfacing. Two years later, I’ve yet to see something this compact, at this price, that delivers true phantom power and hardware MIDI I/O. When you need a winning interface for mobile recording and playback, iRig Pro works as advertised, gets the job done, sounds great, and is painless to set up.