/** * The header for our theme. * * Displays all of the section and everything up till
* * @package protopress */ ?> Glossary of Audio Filter Terms – Craig Anderton  |  Create · Innovate · Inspire
Skip to content 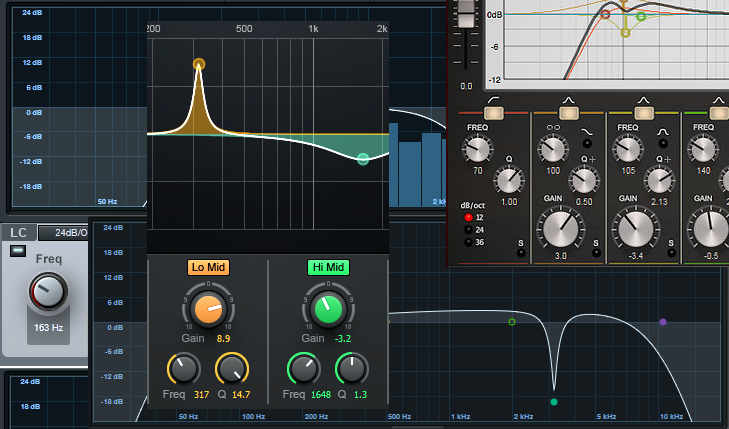 You can think of a filter as an amplifier, but one whose gain or attenuation happens at specific frequencies. This glossary includes terms commonly used with filters. For more information on these terms, see the article What You Need to Know About Filter Responses.

Cutoff frequency: The frequency where the filtering action begins.

Q or Resonance: A filter’s boost or cut can be broad and gentle, or sharp and narrow. The higher the resonance or Q, the narrower the boost.

Bandwidth: The range of frequencies affected by the filter.

Cut: Reduce the level at the selected filter frequencies.

Boost: Increase the level at the selected filter frequencies.

Constant Q filter: Cutting or boosting the level maintains the same bandwidth regardless of the amount of boost or cut.

Variable Q filter: Cutting of boosting the level increases the Q with greater amounts of cut or boost.

Slope: A filter doesn’t just stop responding at the cutoff frequency, but rolls off at a rate according to the slope. The spec for this is dB/octave. For example, a steep slope would be 48 dB/octave, where the amplitude goes down by 48 dB every octave. A gentler slope, like a guitar’s tone control, would be 6 dB/octave.

Passive EQ: The filter circuit uses analog electronics components, but there’s no amplification involved. As a result, there’s a loss of signal going through the filter, so there will often be a post-filter amplifier to bring the level back up.

Active EQ: The filter circuit uses analog electronics components, but with amplification to allow for boosting the signal, increasing resonance, and the like.

Digital EQ: The filter uses software algorithms, and exist solely in the digital domain. For example, the EQ included in a DAW’s channel strip is digital EQ, although it may model a particular type of analog EQ.

Spectrum analyzer: Hardware or software test equipment that shows the level of a signal at specific frequencies, and is ideal for measuring frequency response. Many software EQs incorporate a spectrum analyzer, so you can see how the filtering action affects the audio level at different frequencies.

Ripple: An anomaly that happens when the response isn’t completely flat, but has slight variations.

Phase shifts: Analog EQ stages typically have some degree of phase shift. Combining these stages together, for example with a four-stage EQ, can produce subtle cancellations and additions to the levels. This may seem undesirable, but accounts for the “character” of many classic EQs (like the ones used in SSL consoles).

Linear-phase EQ: An EQ design that has no phase shift. This is sometimes referred to as “surgical” EQ because of its precision. This type of EQ usually introduces some degree of latency, due to the more complex algorithms needed to create linear-phase EQ.

Pink noise: An audio signal with equal energy per octave that’s used for testing audio equipment. It sounds like rain, the ocean, etc.

What You Need to Know About Filter Responses