/** * The header for our theme. * * Displays all of the section and everything up till
* * @package protopress */ ?> Get Better, More Expressive Guitar Sounds with Dynamic EQ – Craig Anderton  |  Create · Innovate · Inspire
Skip to content 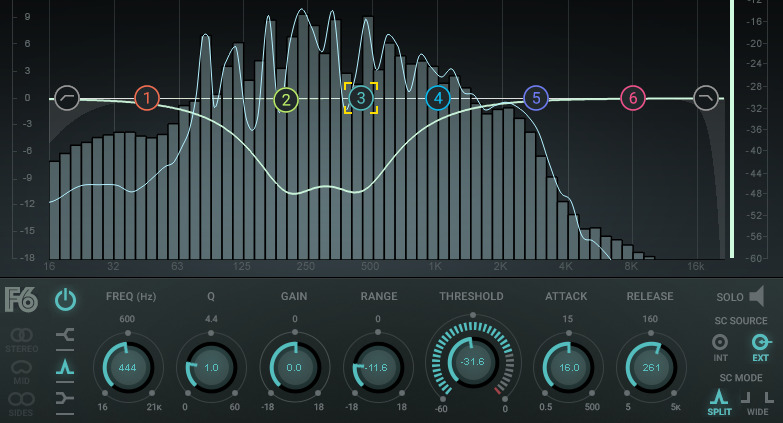 Standard equalizers and compressors (sustainers) are common guitar processors—insert them in a track to shape the guitar’s tone and dynamics, respectively. But these processors can’t react intelligently to your playing. For example, if you use EQ to accent loud strumming by boosting the treble, the same treble boost will still be present when you play softly. Multiband dynamics is a partial solution because you can restrict dynamics control to particular frequency bands. However, you can’t dial in the same kind of precise filtering as conventional parametric equalizers.

Dynamic EQ combines elements of equalization and compression. It boosts (expands) or cuts (compresses) certain frequencies only if they exceed a specified threshold. Unlike a multiband compressor, dynamic EQ uses parametric equalization—you can even narrow down the affected frequency to a dead spot on a bass’s neck. What’s more, dynamic EQ often has sidechain capabilities, so you can control your guitar’s EQ with audio from a different track.

To give a taste of what’s possible, let’s check out three practical dynamic equalization applications with guitar (note: the screenshots of Waves’ F6 Dynamic EQ have been modified somewhat to take up less page space).

The Acoustifier, Reloaded (Fig. 1). Dynamic EQ can do a more sophisticated implementation of the Acoustifier effect I’ve written about previously. The F6 plug-in adds a major boost around 2.7 kHz, but only when playing hard. Therefore, an electric guitar sounds brighter when you play more forcefully, which emulates how acoustic guitars react to touch. This technique is especially useful for helping the neck pickup “speak” better in a track.

Amp Sim De-Harsher (Fig. 2). The F6 inserts before an amp sim, and when you play harder, reduces high frequencies going into the amp sim so the heavily distorted tone isn’t as harsh. As the chord decays, the dynamic EQ restores the highs so the sound is neither harsh when you’re playing hard, nor muffled when you play more softly.

The Vocalist’s Friend. Vocals and guitar frequencies can overlap, and conflict. The standard solution is compressing the guitar when the vocalist is singing, but dynamic EQ (with the settings shown in the featured image) can reduce the specific frequencies that actually conflict with the vocal, instead of the entire guitar. For example, my vocals are predominantly in the 250-500 Hz range. In this application, the vocal track injects a sidechain control signal into the guitar track’s F6 to attenuate only the frequencies that conflict. The louder the vocal, the more it reduces the guitar’s response in the specified range.

Dynamic EQ is a really useful processor to add to your toolbox. Although these applications relate to guitar, there are plenty of other ways that dynamic EQ can improve the sound of everything from individual instruments to program material.