/** * The header for our theme. * * Displays all of the section and everything up till
* * @package protopress */ ?> EQ Techniques for Clean Guitar Sounds – Craig Anderton  |  Create · Innovate · Inspire
Skip to content 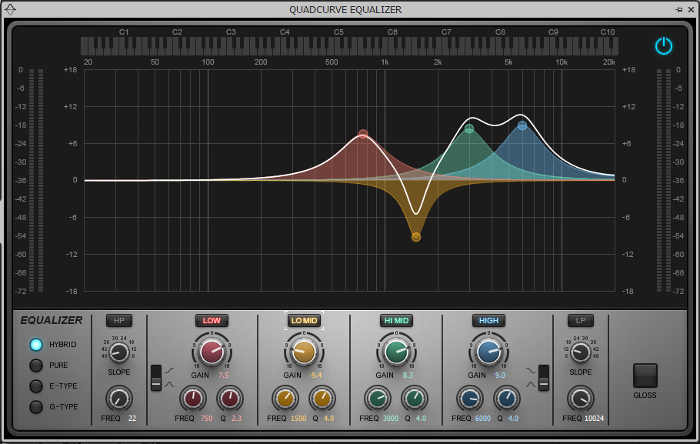 Lately I’ve been playing with obtaining new types of clean guitar sounds. Sure, I like a wall of distortion as much as anyone else, but for rhythm parts a clean guitar can fill up sonic spaces very nicely—especially with this trick.

I’ve always liked the sound of throwing pickups out of phase, except for the volume drop and not being able to vary the tone beyond that single, fixed sound. I also like how it can give a humbucker’s “darker” character more presence. So, I started researching ways to create the out-of-phase sound, but using EQ for greater flexibility. The results are summarized in the article, Out-of-Phase Pickup Tone Emulation with EQ.

However, trying to emulate the sound of out-of-phase pickups requires a complex EQ curve that’s difficult to match precisely with only a few stages of EQ. Six bands of parametric EQ and a couple bands of shelving will get you close, but I thought it might be interesting to try and move beyond just emulating a single-coil sound, and instead, capturing its “mojo” with a fresh approach.

Fortunately, trying to come up with a more universal EQ structure led to some interesting results. Creating four fairly substantial midrange and upper midrange peaks didn’t duplicate the out-of-phase pickup sound, but did a fine tribute to its essence—the four peaks by definition also create dips, which is what happens when sound cancels (as happens when pickups are out of phase). And because they’re midrange peaks, the lows become less prominent, which “tightens up” the sound.

Fig. 1 shows a good starting point. The peaks are at 750, 1500, 3000, and 6000 Hz, with about 6 to 9 dB of gain and a Q factor of around 4.0. But you don’t have to be picky. Changing any frequency, gain, or Q setting produces a wide range of variations. You can also “weight” the gain toward the high or low frequencies. The response in Fig. 1 emphasizes the 6 kHz band to give a little extra brightness; generally, as you go lower in frequency you don’t want as much gain (then again maybe you do, for a beefier sound with some “honk” when driving distortion).

Another option is cutting a band instead of boosting. The featured image resembles Fig. 1, but drops the level at 1500 Hz. This thins out the guitar somewhat so it can sit better in the background of a performance or mix, while the boost in the upper bands retains articulation.

Next time you want a more distinctive clean sound out of your guitar, give this technique a try. You just might find it provides the coolness you’d normally want from an out-of-phase sound, but without some of the drawbacks.