/** * The header for our theme. * * Displays all of the section and everything up till
* * @package protopress */ ?> Anti-Virus Protection vs. Windows Update – Heads-Up! – Craig Anderton  |  Create · Innovate · Inspire
Skip to content 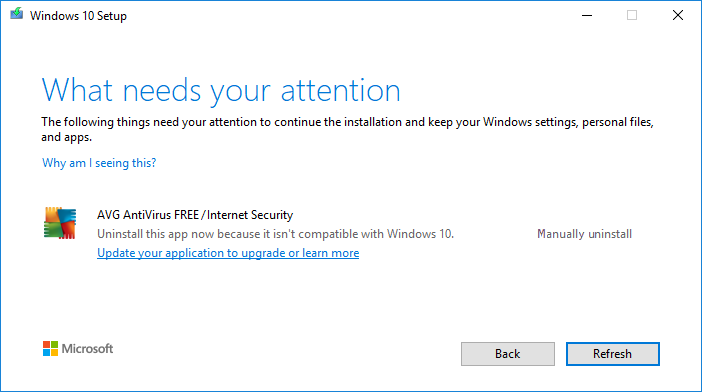 Sometimes anti-virus programs and Windows don’t get along. Here’s how to fix their relationship.

When updating to Windows 1903, I ran into a vexing problem that apparently, isn’t unique to the 1903 update. Although I encountered it with Avast AVG, this issue can also happen with other non-Windows anti-virus programs.

Of course, you generally don’t want a non-Microsoft anti-virus running during updates anyway, in case it thinks that Windows messing around deep in your system is actually a hostile program trying to do an exploit. I’ve always relied on Windows Defender, but if you use a different anti-virus program, try the following. This example relates to AVG, but fixes for other programs work similarly.

However, I recently encountered a situation where Windows said it couldn’t update because of a conflict with AVG. This was mystifying, because I had never installed AVG on my computer. I thought maybe there was some leftover bloatware or something, so I tried installing the latest version, uninstalling, using the Clear and Remove tools, and when none of those worked, manually cleaned out anything in the registry that was left over from the installation. Windows still wouldn’t update..

It turned out that on a non-system external drive, I had a backup copy of the C: drive from my mother’s old computer. She had AVG on it. Even though the program wasn’t installed on my computer, and nothing in my system drive had AVG on it, Windows detected that there were AVG files, and blocked the update. After deleting the AVG folder on the external drive, the Windows update continued.

For me, the moral of the story is that Microsoft has an ecosystem…and Defender is good enough!