/** * The header for our theme. * * Displays all of the section and everything up till
* * @package protopress */ ?> All About Audio Phase and Correlation Meters – Craig Anderton  |  Create · Innovate · Inspire
Skip to content 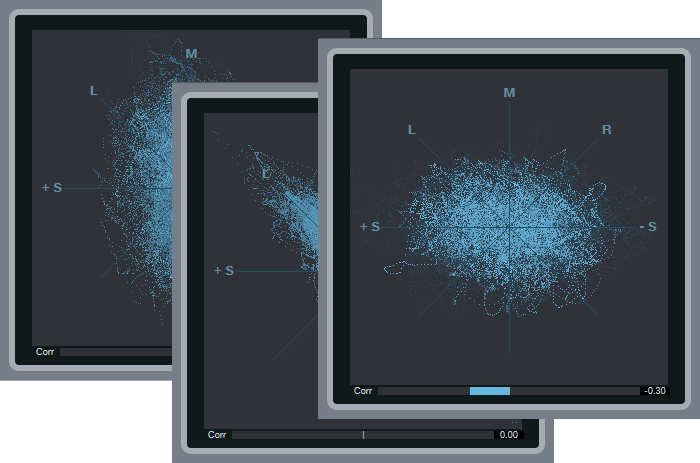 Many people consider the audio phase meter as being mostly only for checking final mixes. However, one very useful technique is putting it in the master output bus, and soloing one track at a time. This gives some insights into the phase, level, and stereo spread of individual tracks in a way that’s more revealing than just looking over panpots.

In brief, the Correlation meter (often a bar graph included with a Phase meter, but it may be separate) indicates a stereo signal’s mono compatibility. This was of crucial importance when mastering for vinyl, because it could indicate if there were out-of-phase audio components in the audio that could possibly cause the stylus to jump out of its groove. These days, it’s largely a stereo world but it’s still important to check for mono compatibility—after all, when listening to speakers, you don’t have perfect stereo separation. You’ll usually monitor correlation in the master bus, but for individual tracks, it can indicate whether (for example) a signal processor is throwing a track’s left and right channels out of phase.

With stereo, you’ll see an excellent visual representation of how much the signal extends into the stereo field. The vertical size indicates the level. As you pan the signal left or right, the stereo field will become narrower around the line that moves from left to right until at one extreme or the other, you’ll see only a diagonal line on the L or R axis.

Note the correlation meter is showing +0.47. This means that there’s about an equal amount of similarity between the left and right channels as there are differences, but nothing is out of phase.

With Mid-Side encoded audio, you’ll see amplitude around the L and R axes, as well as along the M axis. Because the L signal is the center and the R signal the sides, you’ll see a lot more level along the L axis. Also, note the Correlation meter setting of 0.00—this means that there’s no similarity between the right and left channels, which is what you’d expect with a Mid-Side encoded signal.

Several plug-ins widen the stereo image, such as Studio One’s Binaural Pan processor, IK Multimedia’s Quad Image, and others. Widening places more energy in the left and right sides than in the center; the image above shows what happens when maximize width. Compare this to the reading for stereo signals—you can see that in this case, the energy extends further out to the right and left. Furthermore, the Correlation meter shows that there are no significant similarities between the right and left channels, which is a result of the widening processors being based on Mid-Side processing.